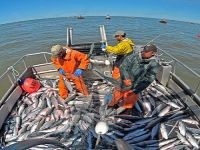 Our seas are being decimated. Bottom trawl fishing is sweeping the ocean floor, leaving behind huge marine deserts. Within 36 hours, there will be a major UN meeting on fisheries, which could mean a turning point in the fight to end the senseless destruction of the oceans. But we must raise our voices urgently.

Our oceans are being systematically destroyed, and we have 36 hours to raise an alarm. The fishing industry uses long strings - made with super-heavy-metal discs to pull large nets across the seabed, crushing everything in its path. This method of fishing for bottom trawling is like cutting down an entire forest to catch a parrot - but our citizens' cry can help stop this destruction.

Within 36 hours, UN delegates will meet to assess the impact of this disastrous practice. The nations of the Pacific islands are fighting to save the oceans and we have asked the Avaaz community to support them. This is our chance to help get a vital win.

If we raise a sufficient number of voices, we will increase their power over large fishing industries. We also encourage major players like the U.S. and Australia - who have banned trawling depth - to put pressure on other countries to increase protection of the oceans on the planet.

We wish to generate an urgent appeal to stop the senseless destruction of our oceans. A group of delegates will deliver our petition directly during the UN meeting. Sign now and help us to reach half a million voices in the next 36 hours:

Huge fishing boats which use deep-water trawling nets displace, on an ongoing basis, one marine ecosystem after another, destroying coral reefs, engulfing every living creature, and leaving behind vast deserts that take hundreds of years to regenerate.

With a single drag, some boats can sweep an area equivalent to 5,000 football fields. Canada, Russia and Spain are leading in this destructive industry that affects the most beautiful and diverse waters of our planet.

The major fishing nations have had more than six years to study the effects of trawling and to introduce more sustainable practices. But most of these countries have not fulfilled their commitments to protect the oceans and are still spending a huge fortune in subsidies - more than $162 million a year - that contribute to the devastation of the oceans.

The meeting this week gives us the opportunity to shake up this predatory fever. An international team of marine scientists has recently requested an end to bottom trawling fishing, and the Commissioner of Fisheries of the EU has spoken out against government subsidies granted to these fishermen.

The tension is rising, but we need a massive global outcry for this meeting at the UN to achieve positive results. Join our call to save the oceans, sign the petition now.

Last year, Avaaz members played a crucial role in supporting the UK to build the largest marine reserve in the world. We also helped to attract international attention to an important meeting on whaling, and we ensure an extension of the global moratorium against commercial hunting of these animals.

When we work together, we provide a valuable contribution to the struggle for the preservation of our seas and the rich diversity of our ecosystems. Come with the Pacific nations and all defenders of the oceans to boost the beginning of a new era of conservation and protection.