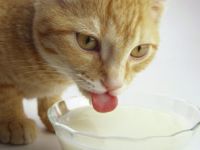 Cats make inertia work in order to quench their thirst. That every cat owner worth his salt can spend hours talking to their pet is well known, they are full of adventure and personality.

Now these cat owners are going to be unbearable, as engineers from MIT (Massachusetts Institute of Technology) have shown that the simple act of drinking water or milk by the cat demonstrates a full knowledge of physics and fluid mechanics. The study is published in this week's journal Science.

First, it is necessary to explain that the cats have what is called incomplete cheeks, where the mouth moves to the side of the face and makes it possible for many carnivores to have the ability to kill or capture their prey. The downside is that cats cannot suck. And it is exactly this ability that makes it possible for humans and other animals to drink liquid in a bottle, as well as even kissing.

But an analysis of videos in slow motion by MIT researchers has shown that cats have developed an efficient strategy so as not to spill or die of thirst. The MIT researchers found that the tongue comes out from the mouth of the cat as a "J", where the top of the tongue is the only one to touch the water.

After that, the cat takes the tongue back up to the mouth very fast - about 1 meter per second. This results in the creation of a liquid column which is 'stretched' by inertia. When the cat closes his mouth, and drinks this column.

"What is amazing is that the cat knows exactly when to shut the mouth and repeats the process on a frequency that increases the volume ingested. If he/she waited another split second, gravity would cause the spine to break and most would fall back into the bowl. "It is here that clearly demonstrates cats' deep 'knowledge' of physics and fluid mechanics," said Pedro Reis, the IG study author.

The physical explanation of the process involves the laws of inertia and gravity. Reis explains that the movement of the tongue induces a vertical displacement upwards, and the water column grows in height and diameter. "Initially, the inertia of gravity wins. However, if the cat does not shut its mouth at the right instant, since the column grew a lot, it would become too heavy and would break up, and most of the water would fall back to the bowl," he said.

At this point, the cats win in the battle with dogs to see which animal is the smartest. With dogs, that also have incomplete cheeks, things happen differently. For drinking water, the tongue comes from the mouth of the animal in the same form of a "J" but, unlike cats, they use the bottom of the "J" as a spoon. "From the standpoint of fluid mechanics, this process is much less interesting," he said.

Question that had never been asked

The interest in the subject arose from the observation of another author, Roman Stocker - at MIT who studies fluid mechanics in the movement of microorganisms in the ocean - of his own cat, one day during breakfast. The study, which did not receive funding, took three years to describe mathematically the process and can be applied to robots that capture liquids without suction.

"This may seem an obvious and trivial question, but no one had asked before how cats drink. Apparently, the cat seemed to struggle against gravity to bring water to its mouth. But the question is how do they do it," said Reis.

To better understand the dynamics of the cat drinking water, the team created a robotic version of the cat's tongue that moves up and down over a bowl of water. "There are numerous processes in the day-to-day that we still realuze very poorly or simply have no idea about."