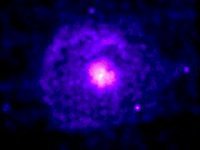 Astrophysicists of Germany, France and Italy have discovered a very old star in the constellation of Leo, whose existence is a complete mystery to them. SDSS J102915 +172927, unlike other stars of the "same age" that appeared immediately after the Big Bang, has a smaller mass, which does not fit into the framework of the modern theory of star formation.

The age of the star SDSS J102915 +172927, located on the very edge of the solar system, according to scientists, is over 13 billion years, whereas the age of the universe itself is only somewhere around 13.75 billion years. The weight of the newly discovered star is below 0.8 solar masses. The stars that have formed at the dawn of the universe, as a rule, contain almost no heavy metals.

It is believed that in that distant era 75 percent of the material universe was hydrogen, 25 percent - helium, and a very small amount of lithium. Stars with larger metal contents are products of thermonuclear reactions and supernova explosions. Low-mass stars in the universe began to emerge only after heavy chemical elements cooled the clouds of interstellar matter up to a point where gravity begins to exceed them in the hot gas pressure and the cloud collapses into a star.

The analysis of the data from the Very Large Telescope (VLT) through X-shooter spectrograph and UVES showed that the proportion of heavy elements in the star SDSS J102915 +172927 is approximately 20,000 times smaller than that in the sun. According to one of the study participants, Perkarlo Bonifacio from the Paris Observatory, a newly discovered star is quite dim, and scientists have been unable to identify any elements heavier than helium it its composition. "On the first spectra of this faint star we found traces of only one "heavy" element, calcium," he said. "To find other metals, we had to significantly expand the observations program."

The star contains forty times less Lithia than such an object should theoretically contain. For Lithia to break down, the substance had to warm up to temperatures in excess of two million degrees Kelvin. "We had to spend some extra time with the telescope to study the star in greater detail," said Bonifacio.

The researchers also drew attention to a limited amount of carbon and oxygen contributing to cooling of protostellar clouds and creating appropriate conditions for the formation of low-mass stars: it was well below the threshold. That is, on the one hand, the older the star, the more its composition should match the composition of the universe in the early stages of evolution, when everything consisted exclusively of light elements and the greater its weight must be. However, SDSS J102915 +172927 did not confirm this rule. It has low content of metal and at the same time has a small mass.

"The standard theory interprets that similar stars with low mass and low metal content should not exist, as the cloud of matter from which they were to appear could not shrink," says Elisabetta Kaffal of the European Southern Observatory (ESO). "We did not expect to find a star in this "forbidden zone." This means that we may have to revise some of the models of star formation."

This means that either the astronomers were wrong about the age of the star, or it formed later (after all its age was determined on the basis of its "metallicity"), or its formation was not according to the "classic" scenario. Finally, there is a theory according to which the Big Bang was not some extraordinary event, and such explosions occur periodically. That is, SDSS J102915 +172927 could have existed, for example, before the Big Bang. At least, the one that gave rise to the most of the objects in the universe. Then everything is explained - both its light weight and low levels of metals.

However, according to astrophysicists, SDSS J102915 +172927 is still not unique: they were able to calculate a few more "primitive" stars with low metallicity. "Now we are going to study them with the VLT, to check whether they are" primitive, "said Dr. Kaffal.