Mathematical model indicates that Earth may have had two moons 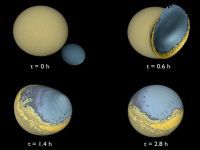 New theory explains the asymmetry of the natural satellite of Earth, which would be caused by collision with another celestial body

The topography of the Moon has always puzzled scientists. In particular, the asymmetry between the far side (or hidden one) that has a bump - and the side that can be seen from Earth. A new study shows that the mystery of the asymmetry of the satellite can be explained by a collision of the Moon, 4.4 billion years ago, with another smaller moon at low speed (5,000 miles per hour), in which the larger satellite would have incorporated the smaller.

This all supposedly happened about 4.4 billion years ago, long before there was any life on Earth to gaze up and see the strange sight of dual moons. The moons themselves were young, formed about 100 million years earlier when a giant planet smashed into Earth.

Made based on computer simulations, the results of the study were published on Wednesday (3rd) in the scientific journal Nature by the surprised authors, Martin Jutzi of the University of Bern, Switzerland, and Erik Asphaug of the University of California at Santa Cruz, United States.

NASA presents a more complete picture of the Moon, "We were a little surprised by the fact that our simulations have shown that a collision at low speed led to an accretion [addition of smaller moon to the moon] and not the formation of a crater," Jutzi said at IG.

The simulation also explains the difference in composition between the lunar hemispheres, showing still that the magma would impact the Moon in the opposite direction, a region that has a high concentration of potassium, phosphorus and rare-earth elements near the crust.

The hypothesis that the bump may have been formed from a collision was raised by researchers from the study of maps of topography and also the thickness of the lunar crust. "From them we realized that the far side looks something similar to another moon that could have been accretive," explained Jutzi.

The theory of the double moons is that the smaller moon was created at the same time and shared the Moon's orbit with it for millions of years before the collision. The next step in the research, he said, will compare the model with new data from future space missions to check if it is really valid. "Another possibility is to do a more detailed study of the dynamics of how a system of two moons revolving around the Earth would be," added Jutzi.