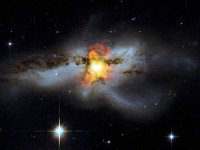 A group of American astrophysicists led by Alberto Cezanne came to the conclusion that some "mysterious" phenomena that occur in our galaxy are associated with the cosmic catastrophe that occurred ten million years ago. Then, the scientists say, the Milky Way collided with a dwarf galaxy the center of which was a massive black hole.

For example, it is difficult to explain too high rate of appearance of new stars from three large and dense gas and dust clouds in the vicinity of a supermassive black hole located in the center of the Milky Way. Logically, the black hole had to absorb the matter around it, which should have limited the birth of stars. Yet, this was not the case. However, there are nearly no oldest stars around the galactic center, in contrast to other regions of the galaxy.

In addition, at the end of last year the orbital gamma-ray telescope Fermi discovered two "bubbles" of gamma radiation in the center of the Milky Way, "swollen" from the top to the bottom by 50 thousand light years, which is almost equal to the radius of the galactic disk, albeit oriented perpendicular to it. Their source was an active core of the galaxy. It is clear that this was caused by some powerful release of energy. Earlier, a mysterious structure was hidden behind a veil of "Gamma-mist" that covers a significant portion of the sky. However, this time in analyzing the data the researchers used special algorithms that allowed them to get rid of the "fog".

It turned out that the photons that make up the "bubbles" have far more energy than the envelope of the "gamma-fog" surrounding them. Initially, it was suggested that the "gamma-bubbles" could produce a jet - a narrow ejection of the matter from the center of a supermassive black hole located in the heart of the Milky Way.

They also found that the iron atoms in the cloud located near the active nucleus also emit energy. Apparently this is due to the fact that once they were subjected to "processing" by the gamma rays.

All of these "oddities" gave scientists a reason to assume that once the Milky Way has experienced a collision with another galaxy. It happened approximately 10 million years ago, which in astronomical terms is not that long of a term. In those days there was already life on earth. Dinosaurs had become extinct by then, and the planet was dominated by mammals, while primitive primates were on the stage of the evolution into human species.

Rather, the collision occurred much earlier, billions of years ago, in the early days of the Milky Way. Since the galaxy that collided with our galaxy was a dwarf, the Milky Way entirely "absorbed" it, including the black hole whose mass was equal to approximately 10,000 solar masses.

As mentioned above, there is a black hole in the center of our galaxy with the mass 4.3 times larger than that of the sun. It began "drawing" the neighbor near. As a result, the dwarf galaxy began approaching the core of the Milky Way in a spiral fashion, losing the matter in the acceleration and "knocking" the old stars out from their places. During the fall of huge masses of the matter into the black hole energy was emitted, which led to the formation of "gamma-bubbles". A chaotic mix of remnants of the matter created favorable conditions for the emergence of new stars.

The final absorption of one galaxy by another ended 10 million years ago, after which the dwarf galaxy has finally become a part of the Milky Way.

How did this event affect the life on Earth? There is no clear answer to this question. There is a hypothesis that the emergence of "Homo sapiens" is nothing but the result of a global catastrophe that accelerated the evolution of the primates. They say that cosmic radiation that gave an impetus to the development of the brain is to blame. However, this has not been proven.

It is not ruled out that this event is not the last "stress" our galaxy has in store for it. Most recently the information was spread in the scientific community about the upcoming clash of the Milky Way with the neighboring Andromeda galaxy. This time, most likely, the consequences for our solar system will be far more disastrous as the Andromeda is not a dwarf object. The good news is that this will not happen for a very long time - 7 billion years.