Andromeda Galaxy is Getting Closer 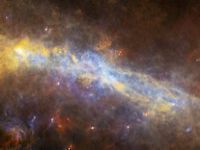 Alberto Noriega-Crespo and his colleagues at NASA have discovered a dense ring of gas with a diameter of over 600 light years, resembling a mathematical symbol of infinity in the center of the Milky Way. Perhaps the "culprit" of this is the neighboring Andromeda galaxy, which scientists say will soon be confronted with our galaxy.

The US-European satellite Herschel is now engaged in an observation at sub-millimeter wavelengths that can penetrate the dense gas-dust clouds, "hiding" the center of the Milky Way from us.
"The observation of this region of the galaxy in the infrared range has been performed many times," says Dr. Noriega-Crespo. "But when we looked at the high-resolution imagery taken by the sub-millimeter probe Herschel, it became apparent that it is surrounded by a huge ring of gas."

Yet, the biggest surprise for the researchers was the fact that the cold gas cloud looked like a figure eight lying on its side, which in mathematics is the symbol of infinity. It turned out that the structure, twisted at the center, is slightly offset from the center of the galaxy, and falls on the region of the cluster of bright stars surrounded by an even larger gas and dust ring. So far there is no information on the shape of the latter. Moreover, additional observations made by the Japanese radio observatory Nobeyama revealed that the "eight" is moving with constant velocity relative to the rest of the area of ​​the Milky Way.

Scientists do not yet give a clear answer to the question of how galaxies form the structures of such a "bizarre" shape. There is a hypothesis that they are formed as a result of gravitational interactions with other galaxies. In particular, with respect to the Milky Way, the nearby Andromeda galaxy which is approaching our galaxy may have an effect. It is approaching at the rate of the 120 kilometers per hour. Sooner or later the galaxies will collide. What will happen then?

Astrophysics Thomas Cox and Abraham Loeb managed to build a mathematical model of the future merger. In essence, when the Sun emerged 4.7 billion years ago, the Andromeda galaxy was at a distance of 4.2 million light years from the Milky Way. Today this distance is 2.6 million light-years, and the rate at which the gap between the two galaxies is narrowing is constantly growing.
At first, the galaxies will touch each other several times with their "sides" and then, some two billion years later, they will merge into one entity - a massive elliptical galaxy without spiral arms.

As a result, a giant cluster of stars that will randomly swarm around the common center will form. In the center there will be a system of two supermassive black holes that the former centers of the two galaxies will transform into. They will absorb the matter at a greater speed, and the matter will be emitting powerful gamma rays. If the nearest star systems are inhabited by living beings, they will inevitably perish.

In addition, powerful jets - relativistic jets of matter ejected from their poles - will form near the black holes. In places of the collision of jets and gas and dust clouds bright clusters of young massive stars will emerge.

The probability that in the process of this merging our Sun will be thrown out into the interstellar space, according to the scientists, is 12 percent. Yet, it is possible that the solar system will be gravitationally captured by the Andromeda galaxy - the probability of this is equal to three percent.

The newly formed galaxy (Cox and Loeb suggest naming it Milkomedae - a derivative of the Milky Way and Andromeda) will be completely formed within the seven billion years, counting from today. However, by the time the sun will have passed the final stages of its evolution, becoming at first a red giant and then a cooling white dwarf, so that life on Earth is unlikely to be preserved.

However, most likely the solar system will be thrown into the periphery of a new galaxy, into the area of a diffusive gas cloud surrounding it. It will be located at a relatively safe distance - no less than 100,000 light years from the center of the galaxy.