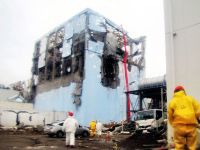 Tsunami warning was issued in the northeast, but was removed two hours after

A strong earthquake of magnitude 7.1 struck northeastern Japan on Saturday 9:57 a.m. Sunday local time, (0057 GMT) and caused authorities to issue tsunami warning for waves up to 50 cm for two hours in the towns of Miyagi, Iwate and Fukushima. Initial waves were less than half a foot.

So far, there are no reports of damage to buildings or people injured. Airports in the region are working normally.

Tokyo Electric Power, the company that owns the plant in Fukushima, ordered that all the technicians be brought to high places and that there is no immediate sign of damage to the plant in the area where an attempt was made to construct a cooling system for nuclear reactors after the tremor in March. In addition, the company said it will monitor barges moored in the sea near the plant that have been used as temporary storage for radioactive water.

The epicenter of the quake happened at a depth of 10 km in the Pacific Ocean in an area close to Honshu, the main island of the country, and was recorded as a 4 on a Japanese scale that goes up to seven, which means moderately strong. In other parts of the Japanese archipelago - including the provinces of Aomori, Akita and Yamagata in the north - it was felt with intensity 3.

However, due to the damage of the earthquake in March, many buildings are fragile structures and retaining walls along the sea are destroyed, which makes the region more vulnerable to even weaker earthquakes.

The same region of today's earthquake is still recovering from the disaster of last March, when a magnitude 9 earthquake followed by a tsunami left around 23,000 dead or missing and led the country into a nuclear crisis because of damage to the Fukushima nuclear plant.