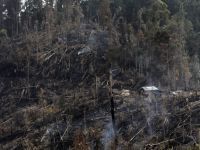 Deforestation in the Amazon fell 44% during the month of May compared to April this year. The data, released last Thursday (30) Deforestation Detection in Real Time, came from the National Institute for Space Research (INPE), which measures the clearcut and forest degradation in real time. The deforested area, captured by satellites that monitor the bioma, fell by more than 200 km ², which indicates a downward trend.

The decrease from 477.2 km ² to 267.9 km ², is explained by the Brazilian Environment Ministry as a result of the harsh measures adopted in March and April by the Crisis Office. Formed in March, after the announcement of increase in deforestation, the task force integrated by the Brazilian Institute of Environment and Natural Resources (IBAMA), the Federal Police, Federal Highway Police, National Security Force and the Army intensified its actions in both combating illegal logging, and in patrolling the highways where illegal timber is transported.

Alerts - The number of alerts issued to guide the inspections by IBAMA doubled, indicating that the satellites were able to more accurately capture the images of deforestation in the Amazon. The more open time allowed better visualization. From January to June this year 500 square kilometers in area were scrutinised and more than 30 truckloads of illegal logs were seized.

The data also reveals that in May 2011 Amazon deforestation has exceeded the figures of the years 2009 and 2010 for the same month.