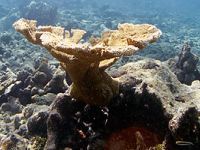 Under international study, marine species are at risk of entering a phase of unprecedented extinction

A new study indicates that marine ecosystems are facing even greater dangers than estimated so far by scientists, and are at risk of entering a phase of species extinction unprecedented in human history.

The survey was conducted by specialists who are part of the International Program on the State of the Ocean (IPSO, its acronym), an entity formed by scientists and other experts. The research brought together experts from different disciplines, including environmentalists specializing in coral reefs, scientists and toxicologists who specialize in fishing.

They concluded that factors such as overfishing, pollution and climate change are acting together in a way that had not been anticipated.

"The conclusions are 'shocking.' We are seeing changes that are happening faster than we were expecting and in ways that were not expected to happen for hundreds of years,'' said Alex Rogers, scientific director of IPSO and professor at Oxford University.

Among the changes that are occurring earlier than expected are the melting of Arctic ice in Greenland and Antarctica, rising sea levels and release of methane in the seabed.

The study also noted that there are knock-on effects caused by the action of different pollutants.

The survey noted, for example, that some pollutants remain in the oceans because they are attached to small plastic particles that landed on the ocean floor.

Thus, there is also an increase of pollutants that are consumed by fish in the sea.

Particles of plastic are also responsible for transporting algae on both sides, contributing to the proliferation of toxic algae, which is also caused by the influx of nutrients into the oceans and pollutants from agricultural areas.

The study also described the acidification of the ocean, global warming and pollution acting jointly to increase the threats to coral reefs, so much that 75% of corals worldwide are at risk of suffering a severe decline.

Life on Earth has faced five ''cycles of mass extinction events" caused by the impact of asteroids, and many scientists believe that the impact of different actions performed by humans may contribute to a sixth cycle.

''We still count on much of the world's biodiversity, but the current rate of extinction is much higher than in the past, and what we are facing is indeed a significant global extinction event" affirms Professor Alex Rogers.

The report also notes that previous events of mass extinction had links with trends that are occurring today, such as disturbances in the carbon cycle, acidification and low concentration of oxygen in the water.

The levels of CO2 being absorbed by the oceans are already much higher than those registered during the great extinction of marine species that occurred 55 million years, the study says.

Among the measures that the study advises be taken immediately are the end of predatory fishing, especially offshore, where there is currently little regulation, map, and then reduce the amount of pollutants such as plastics, fertilizers, agricultural and human waste, and sharply reduce greenhouse gases.

The report's findings will be presented at the UN headquarters in New York this week during a meeting of government representatives on reforms on the way of managing the oceans.