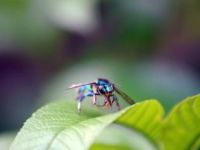 No it is not about Peter Piper or picking pecks of pepper, neither is it about pheasant pluckers. Its name is Euglossa natesi n.sp and it is a bee. Its claim to fame? It is the insect with the longest tongue in the world - over twice the length of its body.

Euglossa natesi n.sp. lives in Colombia, where it was discovered six years ago at the Private Natural Reserve of River Ñambi in Barbacoas, Department of Nariño, near the Ecuador frontier by a team from the National University of Columbia (Universidade Nacional de Colombia) research laboratory (Víctor Solarte, Alejandro Parra and Santiago Ramírez). It was also discovered that this bee has the longest tongue in the insect world, to be more precise, it measures over twice the length of its body and lives curled up in the insect's mouth.

The discovery is published in the June edition scientific journal UN Periódico, from the Universidade Nacional de Colombia, published on Sunday. Professor Rudolfo Ospina, from the Department of Biology at the University, claims that "This is a special insect because it has the longest tongue discovered until now, measuring over two times the length of its body" (16.88 millimetres). This enables it to reach sources of nectar which other bees cannot reach and a consequence of this is the fact that it also acts as an agent to pollinate many different species of flowers.

The insect is named after Guiomar Nates, (Euglossa natesi) Director of the Research Laboratory for Bees at the University because of her contribution to the study of bees.