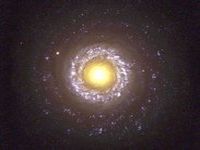 The Hubble Space Telescope has recently managed to photograph a dwarf galaxy NGC 4214, located in the constellation Canes Venatici at a relatively short distance from the Earth - approximately 13 million light-years. Astrophysicists believe that a number of different characteristics of this object make it ideally suited for studying the evolution of stars.

The Constellation Canes Venatici is located in the northern hemisphere of the sky. It is hard to say when it was discovered and by whom. It first appeared on the star charts in 1493. German cartographer Johannes Stoffler portrayed it in the form of two dogs in the constellation Bootes. In 1540, a similar image was drawn on the "star map" of Apia. However, the name of the constellation was given to it by Jan Hevelius, who in 1690 placed it in his atlas "Uranography." He painted two large dogs that Bootes is setting at the Big Dipper, for the first time highlighting it as a separate constellation. Given these facts, we would not be too far from the truth calling him the discoverer.

The area of ​​the constellation Canes Venatici is 465.2 square degrees. It is clearly seen throughout Russia, especially in March and April.

To date, astronomers have identified 57 stars in the constellation Canes Venatici that are visible to the naked eye. The brightest of them is called the "Heart of Charles" and was once considered the center of the constellation with the same name, later "cancelled" by researchers. "Heart of Charles" is one of the most beautiful double stars located close to the Earth. It is a prototype for the entire class of variable stars.

The most conspicuous objects of the constellation Canes Venatici are a spiral galaxy M51 "Whirlpool", spiral galaxy M63 "Sunflower" and the M94, the peculiar galaxy M106, as well as the globular cluster M3 located near the southern border of the constellations Canes Venatici and Bootes.
The newly discovered dwarf galaxy NGC 4214 is remarkable in that it contains clusters of old red super-giants, very large stars at a late stage of their development. In addition, the formation of new star clusters from interstellar gas and dust is ongoing here.

Apart from an excellent location, a relatively small amount of interstellar dust that normally prevents observations contributes to a fruitful research. The photograph was taken by WFC3 camera installed on the Hubble two years ago. In this case, the information obtained from several filters tuned to different wavelengths in the ultraviolet, visible and near infrared bands was used.

The images obtained by the Hubble are valuable because they can show the different stages of stellar evolution. Most of them occupy dim stars that are the oldest, approximately billions of years old. Young star clusters are surrounded by a cloud of glowing gas. In the center of the image certain indentation can be observed with a massive cluster of young stars inside, whose temperature ranges from 10 to 50 thousand degrees Celsius. These luminaries emit ultraviolet radiation and tremendously powerful stellar wind whose velocity is measured in thousands of kilometers per second. It is thanks to the stellar wind that created a shortage of gas and halted further star formation that the indentation has formed.

According to scientists, UV and stellar wind created bubbles of hot ionized gas in the cold interstellar medium. Over millions of years the bubbles have been rising, and inside of them the stars are aging and coming to the final stage of evolution. The photograph clearly shows one of those "inflated" bubbles.

Near the center of the galaxy lies a cluster of hundreds of blue supergiant stars, each of them shining 10,000 times brighter than the sun. The cluster is surrounded by a large heart-shaped bubble that expands as the most massive stars explode inside it, turning into a supernova. According to astrophysicists, new stars can no longer form in the center of the bubble as the clouds are scattered and the hot gas is not tightly compressed. The areas of the galaxy where gas can be compressed will form new star clusters. This means that NGC 4214 is a type of natural laboratory where we can see how the starts are born and die.