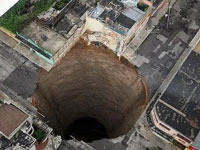 Planet Earth is beautiful and terrible with its natural and man-made objects. They are fascinating and scary at the same time. Some of these objects are holes in the ground, some man-made and others of natural origin. They all have one thing in common - nearly perfect circular shape and, therefore, are beautiful. However, the thought of the forces that wounded the planet are uncomfortable.

Mirny Diamond mine, Yakutia. This man-made monster located right in the city has an unpretentious name - Mirny (which translates from Russian as "peaceful"). The depth of this hole reaches 525 meters and its diameter is 1,200 meters. Some people call this mine the "navel of the earth", and a rumor suggests that helicopter flights over the giant crater are banned as they get sucked inside. The mine has been uninterruptedly supplying the market with diamonds for forty five years, and these diamonds are a recognized standard of quality and beauty. Architectural bureau "AB Ellis" has developed a draft of the "eco-city" to be built in the crater. "Eco-city 2020" provides for the construction of a giant city which can accommodate over 100 thousand people. The construction will be divided into three main levels with living areas and areas for recreation and entertainment. One of the features of the project is a protecting glass roof covered with solar cells.

Big Hole South Africa, Kimberley Mine. The famous Big Hole is also a diamond mine, and was developed manually. People excavated nearly 22 million tons of rock to produce only three tons of the precious stone. The quarry closed in 1914, and its present morphology resembles a volcanic crater. The size of the circle is about 1.8 kilometers, and vertical walls are falling to the depth of 1.200 meters. Underground water filled half the crater, but that does not stop tourists from admiring its grandeur.

Funnel Monticello Dam, Napa, California, USA. This is the queen of all man-made craters, the embodiment of cosmic black hole. We are talking about huge circular spillway water called "black hole" as this is the way the pilots see it from the air. In fact it is a huge pipe with a diameter of 22 meters designed to control water levels around the dam. The flaps open in the rainy season to lose the excess volume of water and prevent damage to the body of the dam. Velocity of the water in the crater is roughly 1,370 cubic meters per second. Construction of the dam was completed in 1957. This arched structure is 93 meters tall and 312 meters long. As you may guess, swimming in the reservoir when the flapper is open is forbidden as it will suck everything in.

Bingham Canyon in Utah, USA. This is the largest active mining pit open for mining copper, molybdenum, gold and silver and located near Salt Lake City. It owns the title of the largest man-made excavation. Its development was launched in 1863 and continues to this day because of high productivity. Over 17 million tons of copper, 652 tons of gold and 5,386 tons of silver have been excavated here. This pit with a depth of 1,200 meters and a width of 4,000 meters, in 1966 was declared a national historic heritage of the United States and became a place of tourist pilgrimage. A viewing platform was installed from which one can observe the work at the bottom. 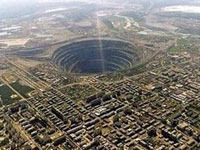 The Great Blue Hole is a place that has become a cult for the famous Jacques Yves Cousteau, who included it in the top ten best places for diving. This amazing round Coral Cave is over 300 meters in width and 145 meters in depth, its dimensions suggest that it is the largest known cave in the world. It is located in the Caribbean Sea 100 km from Belize City. The abundance of the underwater world of the coral reefs and stunning clarity of the water, along with the unusual shape, made The Great Blue Hole a Mecca for divers.

Abyss Sarisariñama, Venezuela. These strange round holes are located on a plateau at an altitude of 2,300 meters above the sea level in southern Venezuela (Bolivar state) and are known as the mysterious Sarisariñama holes. They have a diameter of approximately 350 meters and their origin is unknown. Some of the holes do not only have a perfectly correct form, but their depth strangely coincides with the diameter. One of the theories of the formation of these falls points to the erosion of the underground rivers that washed out sandstone in certain places. The region of Venezuela is known for some endemic plants and animals, indicating its long isolation. The "Lost World" today is not accessible for ordinary tourists.

Barringer Meteorite Crater, Arizona, USA. Some meteorites have fallen on the ground, like the Tunguska, and did not leave craters behind. Barringer Crater is perfectly preserved and has a moon shape. It is a huge basin 1,200 meters wide and 200 feet deep. The meteorite was approximately 30 meters wide, had a weight of approximately 100 tons and hit the Earth's surface approximately 50,000 years ago. It was large enough to form an impressive clear-cut crater, but too small to wipe out the region.

Guatemala Sinkhole. The sinking of the soil with a diameter of 30 meters and a depth of approximately 60 meters consumed a dozen buildings in Guatemala City, Guatemala. The tragedy occurred in July of 2010 after the tropical cyclone Agatha. Two people were killed in the "jaws of the devil." Geologists explain that the unusual round shape of the opening has to do with the shape of underground karst caves. The soil in this area is rich in limestone and salts that dissolve easily in water. Such lapses are typical for the southern U.S. states and Central America, but its size and perfectly round shape have overshadowed the rest.