Projections for the rise in sea level are even worse, it is estimated that it will rise 1.6 meters by 2100. According to the study, decreased sea ice contributes to rapid melting of the Arctic 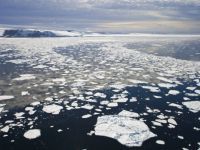 The Arctic is melting faster than expected and may increase the sea level by 1.5 meters, according to a study by the Evaluation and Monitoring of the Arctic Program which contains the most comprehensive data on Arctic climate change. Previous studies have indicated a rise of up to 59 cm in sea level.

The full report will be delivered to ministers from eight Arctic countries next week, but a summary including the main results was obtained.

The summary notes that Arctic temperatures over the past six years were the highest since measurements began in 1880 and that feedback mechanisms point to the beginning of an acceleration of climate warming.

One mechanism involves the greater absorption of heat by the ocean when it is not covered by ice. The ice reflects the sun's energy, unlike the ocean that is darker and absorbs this energy. This effect was anticipated by scientists "but the clear evidence only was observed in the Arctic over the past five years," said the study of EMAP.

The report also disputes some of the predictions made in 2007 by the Intergovernmental Panel on Climate Change (IPCC / UN). The coverage of sea ice in the Arctic, for example, is shrinking faster than projected by the UN panel. The level of sea ice in summer has been at or near record lows every year since 2001, the report said, predicting that the Arctic Ocean will be nearly ice-free during summer in 30 or 40 years.

According to EMAP assessment, the UN panel was very conservative in estimating how much sea levels will rise - one of the most closely watched aspects of global warming because of the potentially catastrophic impact on coastal cities and island countries.

Melting glaciers and Arctic ice caps, including the Greenland ice sheet, will likely raise global sea levels 90 to 160 cm by 2100, according to EMAP.

This is more than the projection made by the IPCC in 2007, which saw them rise between 19 and 59 cm, and it did not consider the dynamics of ice caps in the Arctic and Antarctica.

"The changes observed in the last 10 years in the sea ice of the Arctic Ocean, in the ice mass of Greenland and polar ice caps are dramatic and obvious changes and they represent an obvious alteration in long-term patterns," the EMAP study affirmed.

The main function of the organization is to assist the nations around the Arctic - U.S., Canada, Russia, Denmark, Norway, Sweden, Iceland and Finland - on the threats to the Arctic environment.

The EMAP report said that the melting of glaciers and ice sheets around the world has become most responsible for raising the sea level. Alone, Greenland represents over 40% of 3.1 millimeters of sea level rise observed annually between 2003 and 2008. The loss of ice mass from Greenland, covering an area the size of Mexico has risen from 50 gigatons between 1995-2000 to over 200 gigatons between 2004-2008.

Scientists are still debating how much of the observed change in the Arctic is due to natural variations and how much the warming is caused by emissions of carbon dioxide and other greenhouse gases. The EMAP has projected that average temperatures in winter and autumn in the Arctic will rise 3-6 ° C by 2080 even if emissions of greenhouse gases are lower than in the past decade.

The report's findings will be discussed by some of the scientists who helped compile the study at a conference that starts Wednesday (4) in the Danish capital, Copenhagen.