Wall Street traders out, go away! 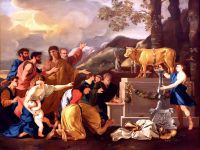 Here we are, at the gates of one of our temples of finance. It is the temple for worshipping profit and greed, where the value of each is determined by the ability to accumulate money and power at the expense of others, where rewrite, manipulate and disregard the laws are the order of the day, where human progress is defined as a mill of endless consumption, where crime and fraud are the usual tools of business.

The two most destructive forces that are in human nature - greed and lust - move the financiers, bankers, corporate mandarins and the leaders of both major U.S. political parties, both of which benefit from the profits from that same system. Both parties were self-placed in the center of creation. The two parties despise the cry that rises from those that are down, humiliated and silent.

They have robbed us of our rights, our ability and our capacity to resist has been sterilized. They want to turn us into prisoners in our own land. They see human beings and the natural world as commodities, as goods to be exploited to exhaustion or collapse.

Human suffering, wars, climate change, poverty, all this is the price we're paying to preserve the profits of planetary finances. Nothing is sacred. The God of Profit is the God of Death.

We see here, the Pharisees of high finance, peeking from the corners of their cubicles and corridors pretending virtue. The sole meaning of life for them is whatever benefits them. The plight of the poor does not worry them. The six million U.S. households in foreclosure out in the open, torn from their homes, they do not worry about. The tens of millions of retirees whose savings for old age were wiped off the world because of fraud and dishonesty on Wall Street, does not worry them. The failure to curb carbon emissions does not worry them. No injustice ever keeps them awake at night. The truth does not worry them. Hungry children do not concern them.

Raskolnikov, a character in Dostoyevsky's "Crime and Punishment" understood that the radical evil that lives in human yearnings would not be vulgar, but superior, extraordinary, an ambition that draws men and women to be servants to the systems of glorification and the most naked greed. Raskolnikov believes in romance - like those who live in this temple of finance - that humanity would split into two groups. The first, the common people. And common people would be submissive and cowardly. Common people would do little but to reproduce and generate more common people forced to work, grow old and die. And Raskolnikov despises these people, they are seen as lower inferior forms of humanity.

In the second group, for Raskolnikov, would be the extraordinary beings. For him, they are the Napoleons of the world, those who break laws and customs, ripping the conventions and traditions and move the world forward, which, after them, would be better, more glorious. Raskolnikov says that though we live in this world, we can free ourselves from the consequences of living among common people, the consequences do not always favor us. The world's Raskolnikovs invest the most absolute, total, complete faith in the intellect. They view with utter contempt the attributes of compassion, empathy, justice, love of truth. And this crazed vision of men and women leads Raskolnikov to kill an old pawnbroker and steal his money.

The priests of these corporate temples, for profit, kill far more harshly than Raskolnikov. Corporations killed 50,000 people last year because they could not pay for adequate medical care.

They killed hundreds of thousands of Iraqis, Afghans, Palestinians and Pakistanis, and saw, with enthusiasm, the value of the shares of companies that manufacture and sell guns multiply by four.

They created a cancer epidemic in the coal fields of West Virginia, where families breathe polluted air, drink the poisoned water and watch the destruction of the Appalachian Mountains, converted into a desert by coal mining companies, which earn billions.

And after plundering the U.S. Treasury, corporations demand, in the name of cost containment, that the country destroy food programs for children, heating and health care for the elderly and infirm, and an end to U.S. public education. They require that the U.S. being converted into a nation of malnourished be tolerated, leaving millions without jobs, to condemn tens of millions of Americans to misery and mental suffering, degradation and death. All those in the U.S., the common people, were condemned by the priests of profit and greed, as if they were junk. So demands the God of the market.

When Dante enters the "city of the damned," the last step before entering Hell, the moans and screams of those who "lived without having ever deserved either praise nor infamous censure" can be heard, rejected by Heaven and Hell, who dedicated their lives solely for themselves, only to seek happiness for themselves. They are the "normal", maybe "good" people, who never did anything other than seek pleasure and their own security, often without disturbing others, but targeted only for themselves. People who never claimed any cause, who never risked anything who 'went on just surviving life.' People who never thought about their life, never felt the urge to think about the world around, that did not look and did not see the world around. To these Dante reserves the eternal punishment of never leaving where you are, in everlasting pain not even hell or heaven, neither here nor there.

Those who live in pursuit of the rainbow glitter of consumer society, buy without questioning the perverted ideology of consumption, they are as Dante taught, moral cowards. They are indoctrinated by corporate information systems and remain passive, while those who make laws, and apply the laws and making it all work - the legislature, judiciary and executive governments in the U.S. - rob us of all capacity to resist. Democrats or Republicans. Liberal or conservative. Nothing makes any difference on that side of the world.

Barack Obama serves the interests of finance and corporations with the same dedication and diligence with which George W. Bush served those same bosses. And to invest our energy and our faith in these political parties, or wait for whatever institutions that exist in the U.S.A. is as if they were instruments of reform, is pure delusion created by the shadows of the pixels of the television screen. We see it, reproduced, as if we were in Plato's cavern.

We must face the siren call of consumer culture and find again, and reset the center of our lives to the values ​​of compassion and justice. This requires courage, not only physical courage but moral courage, to hear what our conscience tells us.

If we are to save the planet, our home and our lives, we must learn not to exalt the values ​​of individualism and we must learn to see the life of our neighbor, those near us. Self-sacrifice defeats the disease of corporate ideology. Self-sacrifice puts down the idols of greed and covetousness. Self-sacrifice requires that we rise up against abuse, war and the injustice imposed on us by the mandarins of corporate power. There is profound truth in the biblical warning: "Whoever clings to his life will lose it" (John 12:25).

Who says "life" does not say "my life only." There will never be justice in the world, if our neighbor suffers injustice. And nobody will have freedom, until we are willing to sacrifice our comfort and embrace the full rebellion.

Electoral democracy was deserted and abandoned. No structure, no institution in society has survived in the U.S. or is safe from contamination by large financial corporations. Which means that now it depends on us. Civil disobedience, which will bring difficult times, suffering and hard days, but this is the spirit of self-sacrifice for the good of all. Civil disobedience is the only way left to us.

Bankers and money managers, corporate and government elites, are the modern version of the Biblical Jews who prostrated themselves before the golden calf. The spark of any money mesmerizes them, drags them ever more quickly towards their destruction. And they want to fasten us to their altars. They want us to kneel before their altars. Then we are to leave inspired by greed and lust, and will continue as before, silent accomplices of the greedy, those who covet for themselves only the wealth that belongs to everyone.

But if we stand against the religion of profit and capital, to demand that society and governments meet the needs and necessities of citizens and the world around us, far more than the wants and needs of the Market God, if we learn to talk, if we learn to be simple and want a simple life, if we love our neighbor as we love ourselves, we will break the chains that bind us today and we will make hope visible again.