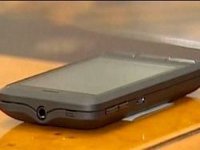 Eldar Murtazin, an expert on mobile devices, has not found in MTS 945 GLONASS Android phone anything that would indicate the use of GLONASS data. The only exception is an application that allows you to test the signal from the GPS-GLONASS satellites and which has no practical value, the expert wrote in a review article on the new smartphone on Mobile-Review.com.

The device presented by head of Sistema Vladimir Yevtushenko to Prime Minister Vladimir Putin at the end of last year was called the Russian analogue of Apple iPhone. The device does not have a separate navigation chip, only an antenna that receives signals from satellites, and the processor MSM7230, which decodes the signal.

Murtazin said that there was no crime in it, and added that hardware solutions run on the same principle. Separate chips can only save energy and calculate the coordinates faster.

However, the way GLONASS signal is used remains mystery as the navigation built-in in Android uses GPS, A-GPS or the orientation of the base stations by default. The expert was unable to find a switch from one navigation system to another or the way to choose a default in the phone menu.

Moreover, the comparison of the size of the standard applications for this device with those on the Vodafone 945 has shown that they are identical to bytes. It turns out that the GLONASS coordinates are counted somewhere in the firmware of the phone, but are not transferred to the navigation program considered essential for the phone. If they are transferred, the program still does not know how to work with them, because it is exactly the same as the program for GPS.

In general, concludes Eldar Murtazin, the use of GLONASS in the civil segment is depressing, because there is no apparent need for it, the explanation of its usefulness is unclear, and products such as MTS 945 simply undermine faith in the system.

Meanwhile, foreign manufacturers of microelectronics and consumer devices do not have a clear picture of the demand for smart phones and navigators with GLONASS outside of Russia.

Most of them see them as a specific in-Russia product, the demand for which is generated by the government.

The American company Atheros that is going to buy its main rival Qualcomm in the near future for 1.3 billion dollars told the publication that they have developed receivers with GLONASS and handed them over for testing to a number of manufacturers of mobile phones, but no official announcement has been made.