Mars atmosphere was much denser in the past 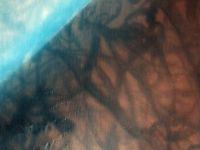 Scientists have discovered that the atmosphere of Mars may have been denser than it is currently and contained liquid water, according to a study published on Thursday (21) in the scientific journal Science.

The study reveals that the Red Planet's atmosphere was much denser in the past. Fragments of dry ice (frozen carbon dioxide) found in the south polar region of Mars demonstrated this fact.

The researchers, led by Professor Roger J. Phillips, analyzed measurements of the NASA radar reconnaissance orbiter (Mars Reconnaissance Orbiter) to calculate the depth and density of deposits of dry ice.

Previous studies had suggested that the south pole of Mars was almost completely composed of water and dry ice that covered only the top layer. However, their measurements show that there could be large amounts of atmospheric carbon dioxide on pieces of dry ice.

These new findings provide evidence that the south pole is home to 30 times more dry ice than previously thought. The results add to a series of recent studies suggesting that, in the past, Mars had a denser atmosphere full of carbon dioxide and water.

These deposits of dry ice can be crucial in helping scientists understand the evolution of Mars' atmosphere.

The authors of the study show that during periods of high polar inclination, most of the frozen carbon dioxide could have melted and been released into the atmosphere.

When the axis of Mars tilts, its poles receive enough sunlight to thaw any ice.

The carbon dioxide released would have made the atmosphere more dense, due to the formation of frequent and intense dust storms, and would have allowed water to remain liquid without boiling in more regions of the Martian surface, the researchers note.

The Mars Reconnaissance Orbiter revolves around the Red Planet to complement the work done by the rovers Spirit and Opportunity.

It was launched on August 12, 2005 with the aim of studying the distribution of water and minerals on Mars, as well as its geological characteristics.