What about monkeys that look Caucasian? 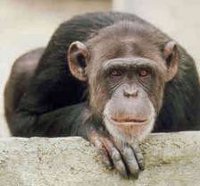 Recently, a California Orange County Republican Party official sent an email of an image of President Obama's face superimposed on a chimpanzee. This is a horrible and offensive photo. We need to have a conversation on this topic now. Not long ago a team of psychologists from Stanford, Penn State, and UC Berkeley have reported that blacks are likely to be thought of by other races as being sub-human and associated with apes: http://www.nowpublic.com/culture/discrimination-against-blacks-linked-dehumanization. Let's admit it! Many people, even blacks themselves, wonder whether black people are more closely related to apes because of certain facial features or other similarities. This issue needs to be dealt with in the open and honestly.

Ultimately, all life forms on earth share varying similarities because of a common Designer who designed similar functions for similar purposes in all of the various species and life forms on Earth.

Young people, and even adults, often wonder how all the varieties or "races" of people could come from the same original human ancestors. Well, in principle, that's no different than asking how children with different color hair (i.e., blond, brunette, brown, red) can come from the same parents who both have black hair.

There are many genetic and biological similarities between various species. This does not necessarily mean that all life evolved from a common ancestor. A better explanation is that the similarities are due to a common Designer (God) who designed similar functions for similar purposes in the various forms of life. Genetic information cannot happen by chance anymore than other forms of information can happen by chance. Science cannot prove it, but science does point to the Creator God as the first Genetic Engineer! It's only logical, dear Watson.

God created species as complete and fully functional from the very beginning. They couldn't survive any other way. A half-evolved dog, for example, wouldn't be able to survive. Darwinian evolutionary theory would have us believe that, by the random forces of nature, partially-evolved species came into existence along with partially-evolved skin, muscles, nerves, tissues, organs and then survived over millions of years as they eventually became complete. What utter nonsense!

Natural selection is just another way of saying "Survival of the Fittest." But, this is exactly the problem for Darwinian macro-evolutionary theory. How can a partially evolved species be fit for survival? A partially evolved trait or organ that is not completely one or the other will be a liability to a species, not a survival asset. How could species have survived if their vital organs were still evolving?

The only evolution in nature that is possible and that can really be called science is micro-evolution, which is variations within biological kinds such as varieties of dogs, cats, horses and cows. Only micro-evolution is observable and can be measured by the scientific method.

Macro-evolution, which teaches that variations in life can occur across biological kinds, is not science but faith.

Mutations produce only variations of already existing genes. They do not produce entirely new genes. For example, mutations in the gene(s) for human hair may change the gene(s) so that another type of human hair develops, but it'll still be human hair!

Furthermore, because mutations are accidents in the genetic code caused by random environmental forces like radiation, almost all mutations are harmful or neutral. Most biological variations in nature are from new combinations of already existing genes and not from mutations.