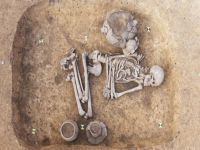 Scientists find skeleton of homosexual prehistoric man: Researchers noticed that individuals who died 5000 years ago were buried with rites usually reserved for women and burial followed rules that mixed male and female traditions.

Czech scientists have excavated what they believe to be the skeleton of a prehistoric homosexual or transsexual man who lived between 4,500 and 5,000 years ago.

The team of researchers from the Czech Archaeological Society found that the remains - taken from a Neolithic archaeological site in Prague - indicate that the individual, male, was buried with rites usually reserved for women.

Katerina Semradova, archaeologist, told BBC that the "atypical" burial indicates that the individual found was part of the "third sex" probably homosexual or transsexual.

"We work with two assumptions: that the individual could have been a shaman or someone from the "third sex." Since the set of objects found buried around the skeleton did not corroborate the hypothesis that it was a shaman, it is more likely that the second explanation is correct," said Semradova.

Objects found in the tomb were not common in male burials from that period. The excavations were opened to the public on Thursday and visitation has been intense.

The remains belong of a member of the pottery culture, who lived in northern Europe in the Stone Age, between 2,500 BC and 2,900 BC.

In this type of culture, men are usually buried on their right side with the head facing west, along with tools, weapons, food and beverages.

The women, usually on the left side, facing the east and surrounded by jewelry and household objects.

The skeleton was buried on its left side with the head pointing west and surrounded by household objects such as vases.

"From historical and ethnological knowledge, we know people in this period took funeral rites very seriously, so it is unlikely that this position was a mistake," said lead researcher, Kamila Remisova Vesinova.

"It's more likely that he had a different sexual orientation, probably homosexual or transsexual."