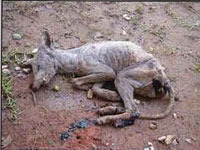 Benjamin Radford, an author of books about monsters and paranormal phenomena, believes that he disproved the existence of the mysterious creature known as Chupacabra. Radford found the first witness, a woman, who gave the first-ever description of the predator. He then convinced her that she could have simply imagined the blood-sucking creature. Radford believes the Chupacabra was never real, but rather the residual memory that the 1995 film "Species" left in the mind of an impressionable young woman.

However, the mayor of the town, where Chupacabra was spotted for the very first time, said that there was not only one woman in the town who had seen the creature. There were hundreds of other witnesses, the mayor said.

Radford, an editor with Skeptical Inquirer, published a book in the USA titled "Tracking the Chupacabra: The Vampire Beast in Fact, Fiction and Folklore". In his book, Radford claims that Chupacabra is nothing more but an urban legend, which became extremely popular in the world owing to the Internet.

The writer says that a woman named Madelyne Tolentino from Canovanas, Puerto Rico, was impressed with sci-fi thriller "Species" in 1995, when she saw a creature.
Afterwards, the woman told her story to a local newspaper. In 1996, the woman was invited for a popular talk show of Univision TV channel, which broadcasts programs in Spanish for the USA and the countries of Latin America. After Tolentino's TV appearance, Chupacabra sightings would be reported across the whole continent - from Argentina to southern states of the USA.

Tolentino described the monster as a creature 1.2-1.5 meters tall with red alien-like eyes, with long claws and spikes on the back. According to Radford, the description was rather suspicious because the woman described almost everything - from the number of toes on the paws to the genitals. The creature, the author noticed, shared a strong resemblance to one of the monsters from the above-mentioned motion picture.

Radford devoted several years of his life to studying the Chupacabra phenomenon. He traveled to Puerto Rico and Nicaragua to meet and interview eyewitnesses. When he met Madelyne Tolentino, the woman said that she had seen the movie "Species" two weeks before the sighting of the creature.

Radford, who has a degree in psychology, concluded that the woman subconsciously included elements of the film monster in her description of the creature. Myths exist for centuries because people want to believe them. Besides, many find it comforting that the vampire does not attack humans, the researcher believes.

José "Chemo" Soto Rivera, the mayor of Canovanas, one of the organizers of the missions in search for the mysterious creature, rejected Radford's theory. Tolentino, he added, found the beast in her home after the creature had killed her parrot, Primeira Hora wrote. Maybe Madelyne made some mistakes in her description, but there were other witnesses, who saw and even shot Chupacabra, the mayor said. Soto Rivera is certain that Chupacabra exists. He he is also certain that he will not read Radford's new book.

The skeptics, who deny the existence of Chupacabra, say that there is no evidence to prove its existence. There is particularly no DNA of the animal.

"By the mid-2000s, anything weird was being called El Chupacabra. Mangy coyotes. Dead raccoons. Even a dried fish in New Mexico, which looks nothing like El Chupacabra," Radford said.

Up to 200 creatures are required to maintain the existence of the species. If every of those monsters were that tall as Madelyne described, there would be no shortage of organic evidence to prove the existence of Chupacabra on such a small and populated island as Puerto Rico, Radford believes.

The mysterious creature was first spotted in Puerto Rico. The domestic animals, which the creature supposedly killed, had peculiar puncture wounds on their necks, as if the unknown predator killed them by sucking their blood. Since the victims were mostly goats, the monster was dubbed chupacabras, which translates as goat-sucker. The first reported attacks occurred in March 1995 in Puerto Rico. In this attack, eight goats were discovered dead, each with three puncture wounds in the chest area and completely drained of blood.

Madelyne Tolentino said that the beast looked like a kangaroo. Other witnesses later said that the beast reminded them a rabbit, a dog and even a giant bat. As many as 200 missions were organized in Puerto Rico during 1995-1996 to capture Chupacabra, but none of them ended successfully.

Ufologists say that Chupacabra could be a non-humanoid extraterrestrial creature or its domestic animal which escaped from spacecraft. Others say that the beast could have appeared as a result of genetic mutations because Puerto Rico was used as a range ground to test USA's radioactive weapons.

Meanwhile, the beast continues to kill farmer animals. At least 19 sheep were found dead in Argentina's Las Compras last week. The neighbor of the farmer, whose sheep were killed, said that she could see her dogs chasing a strange-looking animal.