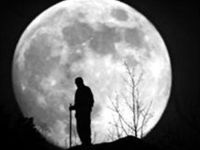 Perigee, is when the moon is at its closest point to the Earth. This Saturday night (19th), a super perigee moon will be 220,000 miles / 356,577 kilometres away, giving all on the planet a spectacular sight.

The moon is in elliptical orbit around the earth. About every 18 years, the moon comes relatively close to the earth and that is called perigee. Apogee is when it's at the farthest point from the earth so the moon appears considerably smaller on those instances.

Contrary to some reports circulating the Internet, perigee moons do not trigger natural disasters. A perigee with a full Moon brings with it extra-high "perigean tides," but this is nothing for concern, according to NOAA. In most locations, lunar gravity at perigee pulls tide waters only a few centimeters (an inch or so) higher than usual. Local geography can amplify the effect to about 15 centimeters (six inches)--not exactly a great flood.

The last full moon appearing so large and close to Earth occurred in March of 1993.

It will take over the sky 14 percent bigger and 30 percent brighter than usual. Out of doors at night, one will hardly be able to miss it.