Ring of Fire: The violent Pacific 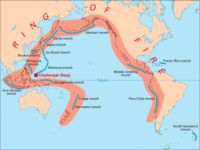 Despite its name, the Pacific has the most violent geography in the world. It is surrounded by the 'ring of fire' that generates 9 out of 10 earthquakes in the world.

The Pacific is the largest ocean. Its area (which various measures calculate between 150 and 200 million km.) has an area larger than the sum of all continents. There are 20 to 30 thousand islands, the majority of the ones that exist, and slightly less than the total of the liquid water on Earth.

Its 'Ring of Fire' in inverted horseshoe shape encompasses whole west coast of the Americas, Alaska, East Asia, Indonesia and New Zealand. This bow is about 40,000 km long and has 452 volcanoes (3 out of 4 that exist on our planet).

Shocks occurring there are caused by the movement of tectonic plates that make and shape the earth's surface.

The plates can collide between them (as happens when the Pacific is subsumed under the slabs of Northern Australia, creating elevations, volcanoes and earthquakes of New Zealand and New Guinea and Japan, Alaska and Hawaii, respectively) separated from them by opening cracks (like those that occur between the Pacific Plate and the Nazca and Antarctica) or move in opposite directions (such as creating the fault and the earthquakes in California).

While earthquakes can generate death and destruction, they are also responsible for having developed many of today's living conditions. The 3 most populated islands in the world (Japan, Philippines and Indonesia in Pacific Asia) are fertile (like New Zealand and the Andes), in part because the product of the lava and movements that trigger these shocks.

The two biggest mountain ranges that exist (the Himalayas and the Andes) were created as a result of the sinking of a plate under which it arose. The Pacific plate has produced the largest mass grave (the Marianas that are 11 kilometers deep, is the lowest point of the earth's crust) and also the highest mountain (Mauna Kea in Hawaii), which measures 10 kilometers from its base to 6 kilometers under the sea. Compared to both, Everest is less than 9 kilometers above sea level.

The Pacific Ocean also produces the climatic oscillation that regularly causes devastation worldwide: El Niño. This is produced when the temperature of tropical seas is altered which creates droughts or heavy rains at its opposite ends, but can also link together several changes in climates as far away as Europe or Africa.

'Tsunami' is the most common Japanese word in several languages. This originated in the Asian Pacific, but people around the ocean have designated it by other names. One of them is 'tidal wave' as well being called Callao in 1746, which destroyed the largest port of the American Pacific, killing more than 95% of its inhabitants.