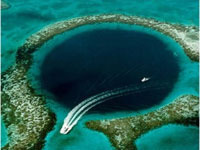 Ocean basins play a critical role in shaping the climate. This conclusion was made after scientists have analyzed the data from a deep water bathyscaphe that investigated the Mariana Trench, one of the most inaccessible places on the planet. The descent of a robot bathyscaphe was implemented in the end of 2010. It was the first stage of the study designed to determine the role of oceans in the carbon cycle, the most intense biochemical process on the planet.

The Mariana Trench is the deepest place in the ocean. It is located in the Pacific Ocean and stretches along the Mariana Islands for 1,500 kilometers. It has steep (seven to nine degrees) slopes and a flat bottom one to five kilometers wide. Only once a manned deep-sea vehicle has reached its bottom. On January 23, 1960, U.S. Navy Lt. Don Walsh and the Swiss explorer Jacques Piccard descended to the level of 10,915 meters on the submersible Trieste.

Given the enormous difficulties associated with the exploration of these depths (the pressure over 1,100 atmospheres, the darkness and temperatures close to zero, and the complex subsequent rehabilitation of the bathyscaphe crew), today the research is carried out by robots equipped with the latest technology. In the end of 2010, an international team of researchers led by Ronni Glud with the University of Copenhagen conducted a submergence of the bathyscaphe and published the first results of the expedition.

The researchers concluded that the ocean trenches act as absorbers of carbon dioxide (CO2 - the most common form of carbon in the biosphere), and they are much more active than previously thought and play an important role in shaping of the climate. Glud told the BBC that the researchers wanted to determine how much organic material was deposited on the seafloor, and whether it was eaten by bacteria, disintegrated or was stored. It turned out that the ocean trench is sort of a trap for the organic matter which is subjected to intensive processing by these bacteria. He added that there was more bacteria there than at the depth of six thousand meters at the abyssal plains (deep ocean plains) which were previously considered the main organic waste utilizers.

This ability is disproportionately large compared to the surface area occupied by the trenches. Although the trenches occupy only approximately two percent of the ocean surface, the researches feel that their role in the carbon cycle is very significant, in the sense that they are likely to accumulate more carbon due to the fact that they function as traps, that is, more organic matter is accumulated in their depths than in other parts of the ocean, said Glud.

Ocean trenches act as absorbers of carbon dioxide, just like they do on the surface of the forest. Such traps can operate in the direction opposite to global warming, and help maintain the ecosystem of the planet in balance. The more carbon the world oceans capture, the more oxygen we have in the atmosphere, said Glud.

The study involved collaboration of the Institute for Marine Microbiology of Max Planck in Bremen, the Japanese Agency for Marine Geology and Technology (JAMSTEC) and the University of Copenhagen. A robot bathyscaphe has reached the bottom of the trench three hours after launch.

Sophisticated deep water equipment for measuring carbon stocks was created and implemented for the first time. To withstand the pressure of the column of water of nearly 11 kilometers, all the sensors were made of titanium alloys. In the next step, scientists intend to determine how much carbon is accumulated in the trenches as compared to other parts of the seafloor.

This is not the first surprise brought by the ocean trenches to the scientists. In 2008 an international expedition led by the British University of Aberdeen found unknown species of deep-sea fish, shrimp and other crustaceans at a depth of over seven thousand meters. Cruise specialists researched the ocean rift near the coast of Chile and Peru in the south-eastern Pacific Ocean, where the depth reaches 7,500 meters. Then three questions came up: what these species feed on, how can they withstand tremendous pressure and how they breed. Apparently, the first issue has been resolved - they eat organic matter sucked in by the oceanic depths.