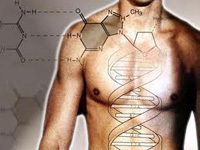 Every year brings new scientific discoveries that shed light on the past. The Institute for Creation Research is dedicated to the study of origins from a biblical perspective, and ICR News has compiled what it considers to be the top findings related to origin studies from 2010. This article examines the field of human genetics, and will be followed by features on breakthroughs in zoology, paleontology, astronomy, and the genome.

The genetic code is part of a functioning language. It has all the features of communicated information, including symbols, grammar, meaning, and purpose. And it's all contained in DNA, providing the information to build proteins.

Researchers have long suspected that this first code was just one part of the process, since it only specified the production of proteins. Another code or codes must tell cells when to start and stop production, as well as how fast to produce the needed materials.

This year, researchers worked hard to piece together critical parts of an entirely different code, one that transmits information using certain DNA sequences, the three-dimensional shapes of many RNA molecules, and other components in the cell.

A team recently found that some systems are activated by many tiny signals added together. Once enough signals convey the same message along different pathways, production is switched on. The researchers also found that many systems are regulated by "antagonistic" signals. One RNA carries information that is "pro" production, while another RNA signals "anti" production. When more of one type of RNA is present than the other, the majority signal is added to the regulation network. In a study published in Nature, information in "the splicing code" was found to be deeply complicated and involved many layers of communication.

What does this have to do with origins? Every single example of coded information, or language, is always produced through rational, intentional will or volition. There are no books without authors, and all known computer programs came from programmers who knew the proper language. What has been discovered about the genetic code has been clearly sufficient to infer the presence of a great Creator of life. Now, the splicing code, which appears to be orders of magnitude more complicated, argues even more forcefully for a rational and intentional mind behind the processes of life.

As mutations accumulate in populations of animals and people, they act as ticking time bombs primed to go off when the organisms can no longer function because of degraded genetic information. An accurate measurement of the rate of mutations would enable researchers to estimate how many "ticks" are left before the bomb explodes, and how many ticks have already taken place.

According to a study published in January 2010, humans accumulate mutations at a rate of 1 to 5 percent per generation. Another 2010 DNA base-by-base analysis yielded a smaller number, finding that 60 new, irrevocable mutations add up each generation. Either result shows that the human genome clock has been counting down fast. These data set reasonable limits to the total duration of mankind on earth. Those limits are incompatible with "millions of years," but they fit just right with the thousands of years history that the Bible provides. The human genome looks very young indeed.

One common argument used to support the evolutionary concept that humans and chimpanzees shared a common ape-like ancestor was that the two species share so many of the same genes. In 2009, a counterargument held that these studies focused only on the genes and ignored the equally critical regulatory DNA sequences. Thus, the "we share the same genes as chimps" argument can only be supported by extremely biased studies.

But in 2010, the first direct, sequence-for-sequence comparison of any of the corresponding chimp and human chromosomes was published. The new work was made possible by powerful new techniques that are able to quickly compare reams of data, unlike prior spot-check estimates of DNA sequence similarity.

The results showed that the human "Y" chromosome is totally different from the chimp's, containing large sections of coded information that were unique to man, and very large portions that had a unique layout and arrangement. In other words, humans and chimps look to be in no way related.

Discoveries from 2010 have brought confirmation of clear biblical teaching that mankind is a distinct and unique high-tech creation that is locked into a long-term pattern of decay. Who knows what 2011 will bring to bear on the question of human origins? It would be no surprise, however, if further unforeseen specified complexities are discovered.