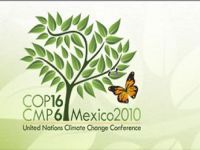 The Head of Government of the Distrito Federal, Marcelo Ebrard, considered that the resolutions adopted at the Summit on Climate Change in Cancun represent a rematch of the previous meeting in Copenhagen, which was considered a failure.

During a conference held in the resort of Acapulco, in the southwestern state of Guerrero, the governor of Mexico City said that Cancun achieved some progress, but overall what was wanted was not approved.

Ebrad criticized that the Convention Framework of the Parties of UN Climate Change (COP-16). The rich countries did not commit themselves concretely to reduce polluting gases, which was the first demand of the states most affected by global warming.

Regarding the so-called bonus of carbon credits agreed for 2020, he said it is "it is very far from what needs to be invested, some 100 million dollars is nothing at all."

He recalled that the Federal District will reduce its own resources to 14 percent of the daily emissions of polluting gases in a plan that will be undertaken in 2011. However, the U.S. did not pledge themselves in Cancun to lower the contamination not even at three per cent, said Ebrad.

He added that the Federal District will follow the measures in the pact signed in Mexico City for Climate Change, adopted a few weeks ago at the Worldwide Congress of Mayors, which had the participation of thousands of mayors from more than 100 countries.

We are going to reduce emissions as soon as possible because we see that the terms of the general treaties of national governments are not advancing, he commented.

In a special session, the government's chief capitalino presented the activities of COP-16 Cancun, outside the official program, and Mexico City's pact against Climate Change, for which he was elected as spokesperson for the cities of the world.

At the Mexico City world summit of mayors, participants spoke out in favor of funds to combat climate change, which are handled by the UN, given directly and more quickly to the cities from all continents.