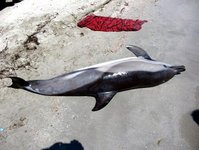 Scientists still do not have any explanation to mass suicides of whales. There is a theory saying that whales and dolphins beach themselves because of the use of naval sonar systems. Another theory says that there is not enough room for cetaceans in the world ocean.

Dr Simon Berrow of the Irish Whale and Dolphin groups said he could not rule out sonar interference for confusing the whales that led to their beach deaths in west Donegal. It became the largest mass suicide committed by whales in the history of Ireland, the scientist said.

In 2005, international ecologists said that whales beach themselves because of sonar systems used by submarines. Scientists said that the sound of the systems disorients dolphins, making them swim up to the water surface too fast, and the animals suffer a shock from abrupt change of pressure.

A group of American biologists from The Woods Hole Oceanographic Institution discovered as a result of a series of experiments that dolphins develop temporal deafness because of the use of naval sonar systems. The lab tests were conducted with the participation of bottlenose dolphins, who were exposed of sonar signals. The tests showed that the sea mammals panicked as soon as the sound systems were activated. The researchers said that every time dolphins hear the sounds of sonar systems in the ocean, they panic and swim too far in shallow waters. As soon as the animals beach themselves, they die from their own weight and decompression sickness, which occurs when nitrogen forms bubbles in the bloodsteam and tissues of their bodies.

However, it is still not clear, why such fast and incredibly smart mammals as dolphins do not swim away as soon as they hear or see a submarine in the ocean. Most likely, the sound produced by the sonar system happens to be locked out in the layer of warm water, where the dolphins prefer to stay. Layers of cold water reflect the sound and sent it back. Thus, the sound creates a vast field that reaches out to many kilometers around. In this case it is simply impossible for dolphins to escape. A similar effect may appear because of the complicated underwater relief - mountains and trenches - and the animals find themselves trapped.

Such a theory looks quite reasonable. However, in most cases, whales and dolphins beach themselves in the regions of the southern hemisphere where submarines normally do not navigate. The above-mentioned self-killing of whales in Ireland is an extremely rare occurrence. Whales do not kill themselves on the shores of such powers as Russia, China or North Korea that have large underwater fleets. Therefore, sonar systems may have nothing to do with the mysterious phenomenon.

It is worthy of note that cetaceans began to commit mass suicides at the time when their hunting was strictly prohibited in the world. Biologists do not know how fast their populations have grown after the ban, but it is possible that there is not enough room in the ocean for whales and dolphins now. One should also bear in mind the fact that cetaceans sit on top of the food chain in the natural world. Their only enemy in man, which means that no one on the planet, save humans, regulates their number.

Many animals do not have genetic mechanisms to regulate their populations. It is not ruled out that cetaceans are included in the group of such creatures. Therefore, it is only infectious and parasitic diseases that can perform the regulating function, as well as various stresses that may lead to mass deaths.
When Greenpeace activists try to save beached whales pushing them back into the water, the mammals refuse to swim away and return to their deaths on the shore. Such behavior reminds the behavior of a mentally unbalanced human being, who tries to commit suicide over and over again no matter what efforts medics take to save him.