The two kinds of evolution 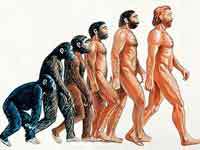 How could partially-evolved plant and animal species survive over supposedly millions of years if their vital organs and tissues were still in the process of evolving? How, for example, were animals breathing, eating, and reproducing if their respiratory, digestive, and reproductive organs were still incomplete and evolving? How were species fighting off possibly life-threatening germs if their immune system hadn't fully evolved yet? The fossil record furnishes no true evidence of partially-evolved species.

Most biological variations are the result of new combinations of already existing genes, not because of mutations. All real evolution in nature is simply the expression of previously existing genes that didn't have opportunity for expression before. If the genes for a particular trait don't exist then there can be no evolution of that trait

People often wonder how all the varieties or "races" of people could come from the same original human ancestors. Well, in principle, that's no different than asking how children with different color hair ( i.e., blond, brunette, brown, red) can come from the same parents who both have black hair. Just as some individuals today carry genes to produce descendants with different color hair and eyes, humanity's first parents, Adam and Eve, possessed genes to produce all the variety and "races" of men. You and I today may not carry the genes to produce every variety or race of humans, but humanity's first parents did possess such genes.

Many people have wrong ideas about evolution. For example, in November of 2004, articles appeared in major U.S. newspapers saying that running may have contributed to the evolution of man.

The simple fact is that physical traits and characteristics are determined and passed on by genes - not by running or any other form of exercise. Traits or characteristics which are acquired from the environment simply cannot be passed on to offspring (i.e. a woman who loses her finger will not cause her baby to be born with a missing finger; changing the color and texture of your hair will not affect the color and texture of your children's hair. Even if an ape ever did learn to walk and run upright it still would not be able to pass on this trait to its offspring. Only the changes that occur in the genes (genetic information) of reproductive cells ( i.e. sperm and egg) can be passed on to offspring. That is a simple fact of biology.

Biologically speaking, only genetic similarities within a biological "kind" can be used as proof of relationship since only members or varieties within a "kind" are capable of inter-breeding and reproducing, thus establishing proof of a relationship.

What about all the non-coding segments of DNA commonly known as "Junk DNA"? Evolutionists believe that the presently "non-coding" segments of DNA were at one time useful (that they actually coded for something) in an evolutionary past but became broken-down and, therefore, now don't code for anything. Evolutionists believe that these "broken-down" genes will someday, by chance mutations, evolve into entirely new genes. How wrong they are. The latest science shows that "Junk DNA" isn't junk after all! It's we who were ignorant of how useful these segments of DNA really are. Recent scientific research published in scientific journals such as Nature has revealed that the "non-coding" segments of DNA are very useful, after all, and even essential in regulating gene expression and intracellular activities.

Visit www.icr.org to read excellent articles by scientists who believe the scientific evidence supports creation. For a more in-depth study of the subject, please read the larger version of author's article "The Natural Limits of Evolution" at his website.

The author, Babu G. Ranganathan, has his B.A with concentrations in theology and biology and has been recognized for his writings on religion and science in the 24th edition of Marquis "Who's Who In The East". The author's articles may be accessed at www.religionscience.com. The author's recently published children's story "The Selfish Apple Tree" is available from WestBow Press.