In 2013, the Sun will destroy all means of communication on Earth 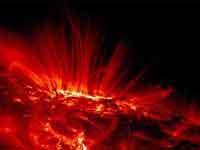 A frightening forecast was published recently by experts of Space Agency NASA. According to American astronomers, in 2013, after years of hibernation, the Sun will wake up, and Earth will be threatened with unfortunate consequences. Widespread outbreaks on the hot star can lead to a global failure of satellite communications. As a result, the planet is awaiting chaos.

In his report, Defense Secretary Liam Fox noted that the perfect electromagnetic storm will lead to a technogenic disaster on Earth. He reinforced his words with the recent statistics which indicates that the surface temperature of hot stars is rapidly increasing.

Solar storms will generate a great level of radiation that will affect the Earth's magnetic field. This could prove to be a collapse for the humanity - trains and planes will stop, GPS-navigation will be affected, mobile and radio networks will disappear.

As Liam Fox stressed in his address, the society is too dependent on technology, and this makes it very vulnerable. Natural protectors of Earth will simply not cope with the "riot" of the Sun, which will lead to the failure of all computers. Also, due to solar activity banking system can be affected, The DailyMail reports.

Failures in electric power around the world can stretch from hours to several months. However, negative consequences of this outbreak can be minimized if we prepare for the collapse in advance.

Scientists have been investigating solar activity for 11 years. Previous years have been rather quiet. But, according to experts, this is the calm before this storm. Rings of fire, ready to escape from the surface of the Sun in the near future, are equal to a hundred hydrogen bombs in terms of power. If their destructive power reaches Earth, it will cause great economic losses. According to preliminary estimates, they will be 20 times greater than the damage from the famous Hurricane Katrina.

For information: solar flares are the most powerful of all manifestations of solar activity. The energy of a large solar flare reaches 1032 erg, which is approximately 100 times greater than the thermal energy that could be obtained by burning all known oil and coal reserves on Earth.

Strongest corpuscular flow perturbs the magnetic field of our planet, resulting in very fast and strong change its characteristics. Particles moving at speeds of 400-1000 km / s, reach earth's atmosphere within a day or two. This process is called magnetic storm.

It has long been known that solar flares provoke magnetic storms on Earth. In those days, doctors ask weather-sensitive people to be careful and avoid stress, both physical and emotional, because such cosmic phenomena increase the risk of cardiac diseases. It was observed that 13% of cases of myocardial infarction occur during magnetic storms.

Typically, these storms are accompanied by disturbances of the ionosphere, which in particular leads to interruptions in radio communication. Solar flares are a frequent and quite serious phenomenon. It is accompanied by a surge of electromagnetic radiation that can cause irreparable harm to our planet.

In 2002, NASA satellite recorded a giant flare on the Sun. It caused formation of prominence whose diameter is 30 times greater than Earth's. Scientists said that we were lucky: there was no release of energy in the direction of our planet. Otherwise, the emission of such a force would have lead to significant distortions in the magnetic field.

In November of 2003 there was another powerful flare that brought down a Japanese communications satellite Kodama, which was first transferring clearly wrong information, and then disconnected. This ejection of stellar matter was the third largest on record. Let us see what 2013 has in store for us.