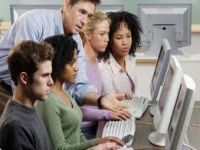 Recent studies in the United States and Romania that compared the use of computers at home with school learning reveal that the effect is negligible or even negative.

These studies were reviewed by Randall Stross in the New York Times (Computers at Home: Educational vs. Hope. Teenage Reality of July 9, 2010).  He argues that the intensive use of computers in school programs such as "One Laptop Per Child" at home by teenagers, is a waste of time for educational purposes.

Ofer Malamud (Chicago) and Cristian Pop-Eleches (Columbia) prepared the study "Home Computer Use and the Development of Human Capital" (NBER Working Paper No. 15 814 March 2010). They traveled in 2009 to Romania to gather information from lower socioeconomic households who had opted for a government program that donated a $200 voucher to buy computers if they qualify to a certain level of family income.

Economists measured the impact having computers at home had on the lower middle class students compared to their peers who did not receive the allowance for being slightly above the cutoff. They found no benefit, but rather there is damage once the computer reaches the house. While students develop cognitive and computational skills (RIT), academic achievement falls in math, English and reading in Romanian, approximately one third of standard deviation. This occurs in a context in which the computers were destined for play, moving the time previously devoted to homework and reading (while they still had no Internet access).

In North Carolina - United States, Jacob L. Vigdor and Helen F. Ladd (Duke) reported similar results from their research for the National Bureau of Economic Research, published in June 2010. They analyzed the arrival of broadband to North Carolina between 2000 and 2005 and its effect on tests applied to lower secondary students. Students scored lower in math where broadband was installed, and scores continued to fall as the service expanded to more households. The effect of the drop in math and reading was evident in low NSE households in which possibly the lack of parental attention allows them to spend time playing instead of studying and doing homework.

In Texas - United States, the state allocated $20 million to distribute laptops to students in 21 secondary schools who could take them home (4-year experiment in immersion technology.) Another 21 high schools were similar and were used as a control group.  The conclusion of the Texas Center for Educational Research was that only in computational skills does the digital divide close. In all other respects, there were no significant benefits.  Or in any case, there were mixed results, although the school computers were configured to block email, chat, games and many non-educational sites.
The study's conclusion points out that "there is no evidence linking technological immersion with self-directed learning or general satisfaction with school work."  So those who believe that students using computers will improve learning in school and will also close the "digital divide" between rich and poor have to revise their basic  theories as well.

My hypothesis is still the winner: there is no alternative to having good teachers.  Only if the technology will be in the charge of trained and quality teachers will they profit, as it happened with primitive technologies, from before pen and paper existed.