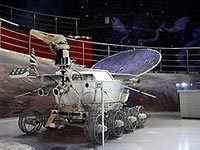 The main tasks of the new Indo-Russian project Luna-Resource in the coming years include study of the Moon's poles by landers and delivery from the lunar surface to Earth samples of water and other substances. Research will shed light on the mystery of the origin of our planet, solar system and universe. Start of the project is scheduled for 2013.

The Russian lunar exploration program is planned for the next ten years. In the years 2012-2014 there will be two expeditions - the Russian Luna-Glob and the Russian-Indian Luna-Resource.

The main objective of this mission, which will be implemented with the participation of Russia and India, is to prove presence of water on the Earth's satellite, revealed during a mission Chandrayaan-1.

Chandrayaan-2 project provides for creation of a device consisting of two parts - the orbiter and lander. During the expedition it is planned to deliver the latter to the Moon's South Pole to study the surface and the composition of the lunar soil.

The lunar exploration program will deliver to the Earth samples of water and volatiles from the lunar poles for further study. The experiment, if successful, will help to understand where on the Moon the water comes from, and open some secrets of the origin of the universe.

The Indian Space Research Organization (ISRO) has already informed the Russian Space Agency that it has approved a list of scientific instruments on board the second lunar mission Chandrayaan-2. According to current data, India plans to launch the spacecraft with the launch pad located in the south of the country in 2013.

One of the most acute problems of any space program is maintaining the required temperature regime in the instrument compartment of the vehicle and providing electric power lines on-board functional equipment, research and technological equipment. After all, the limited energy resources, or low reliability and power failure could lead to loss of long and expensive effort to implement this program.

The orbital part of Chandrayaan-2 will include five main structures that will explore the moon in different ranges; two more will be on the descent module.

Of the five instruments installed on the orbital module, two are improved versions of those used during the mission Chandrayaan-1, but three are new. Their development will be conducted by specialists of Indian research institutes.

The orbiter will house:

- Aperture radar S-and L-bands for studying the structure of the lunar ice and search for the presence of water on the moon or under the surface.

- Infrared spectrometer for studying the exosphere of the Moon.

After the servicing is over, the Russian landing pad weighing 1,250 pounds will land on the surface of the Moon. The Indian lunar rover will collect and analyze the composition of the lunar soil. To do this, it will carry two instruments: the breakdown laser spectrometer (LIBS) and X-ray spectrometer to the alpha-particles (APIXS).