An Irish scientist who showed an article to his female coworker is charged with sexual harassment. 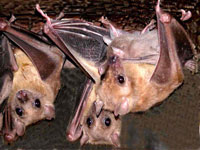 Dr. Dylan Evans, a psychologist and behaviorist who teaches in the University College Cork, came to the office of Dr Rossana Salerno Kennedy who is lecturing in the same college. They had a discussion where Dylan tried to prove that humans are not unique in their behavior. To prove his point, he showed her a scientific article about peculiarities of oral sex among bats, published in a specialized journal PLoS One.

“She asked me for a copy. She was not embarrassed in the least. And I had no intentions to embarrass her. I had no idea it could turn like this ,” the scientist explains .

Two weeks later Dr. Evans received an official notification from the administration that Dr. Kennedy accused him of sexual harassment in the form of demonstrating to her a dirty article and complimenting her on her looks.

“I was shocked, insulted and humiliated. I was very ashamed. I asked for a copy of the article to finish our discussion,” the woman explained the reasons for her complaint.

A special committee satisfied her claim, acknowledging that the article might have been offensive. Now Dr. Evans will be on probation for two years and will be fired if something similar happens.

Now many scientists are outraged with the dubious decision. They support their colleague and demand that the sentence is vacated. The Irish Federation of University Teachers has filed a petition where it called the scandal ridiculous and violating the intellectual freedom and freedom of speech. Scientists willingly sign the petition . Dr. Evans is supported by 2,500 colleagues all over the world.

Why was the Irish doctor horrified? Why was she not able to calmly discuss unusual animal behavioral model? It would have been different if the article was demonstrated to a physicist by a mathematician, in this case there could probably be a dirty insinuation.

The research on bats was conducted by Chinese scientist Min Tan and his colleagues from Guangdong Entomological Institute in Guangzhou, China. The research materials include video presenting no more than graphs. It is surprising that Dr. Kennedy chose to file a claim against the famous scientist.