Giant Lizard Discovered in the Philippines

Biologists announced on Wednesday, the spectacular discovery of a new species of giant lizard, a reptile the size of a grown adult man, and endowed with a double penis, in the Philippines. The monitor lizard, a skittish animal, though colorful, is a close cousin of the Komodo Dragon of Indonesia. But unlike the dreaded dragon, he is not carnivorous and does not feed on carrion. Rather it is an entirely peaceful animal eating fruit. 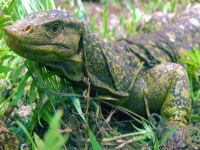 Giant Lizard Discovered in the Philippines

Called the Varanus bitatawa, the lizard measures two meters in length, according to an article published by the Royal Society. The lizard was found in a river in the northern island of Luzon, Philippines where it survived the loss of their habitat to hunting practiced by the locals, who use it for food.

It is not known, however, how many of these animals survived. It is almost certain that the species is in serious danger of extinction and could have gone away without ever being cataloged had a large male specimen not been rescued, alive, in possession of a hunter, last June.

The discovery of a species so special in a densely populated and cleared area "is an unprecedented surprise," stressed the report's authors, in an article published in the journal Biology Letters. The only significance of such discoveries made in recent decades were the Kipunji monkey, which inhabits a small area of forest in Tanzania, and Saola, and a wild ox found only in Vietnam and Laos.

The Varanus bitatawa has distinctive markings and an unusual sexual anatomy. His scaly body and legs are dark blue with light yellow dots, while the tail is marked with alternating segments of green and black.

Males have a double penis, called hemipenis, also found in snakes and other lizards. The two penises are usually used interchangeably, and sometimes contain spines or hooks to attach the male to female during mating. The giant lizard has a relative in Southern Luzon, the V. olivaceus , but the species are separated in river valleys and a precipice of 150 km in length, making it likely that they have never met.

Scientists say one reason that would explain why the new lizard was not detected until now is that it never left the forests of the Sierra Madre mountains, where it is native to venture into open spaces. The finding "raises the recognition of the Philippines as an important area of global conservation and biodiversity of a regional superpower," the authors concluded.

The giant lizard will become "a kind milestone" for conservation efforts in order to preserve the remaining forests of Northern Luzon, which disappear quickly under the pressure of population expansion and deforestation.