The Invention of Atheism 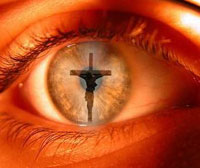 The Invention of Atheism

Atheism is an invention of man to escape the voice of his conscience that says he is morally accountable for his life and actions before a Supreme Being. Atheism suppresses the conscience and gives the atheist the feeling of freedom to live life as he or she pleases regardless of ultimate consequences..

What does science have to say to all this? Science is knowledge based on information gathered directly through our senses or indirectly through scientific instruments . Science cannot prove that the universe originated by chance (which supports the atheistic view) or by design (which supports the theistic view) because the origin of the universe was outside of human observation. However, we can use science to support one view or the other.

Of course, once there is a complete and living cell then the code and mechanisms exist to direct the formation of more cells. The problem for evolution is how did life come about naturally when there was no already existing code or directing mechanisms in nature.

In the midst of arguments over evolution and intelligent design, it is amazing how many in society, including the very educated, believe that scientists have already created life in the laboratory. No such thing has ever happened.

Science, again, cannot prove that we are here by either chance or design, but the scientific evidence can be used to support one or the other.

It is only fair that evidence supporting intelligent design be presented to students alongside of evolutionary theory. No one is being forced to believe in God so there's no real violation of separation of church and state.
The author hopes readers will enjoy his Internet article "The Natural Limits of Evolution" at http://bgrnathan.blogspot.com/2010/01/natural-limits-of-evolution-part-i.html.