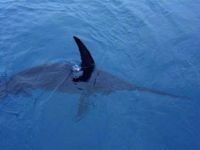 This isn’t the first time. Swordfish have hit Angolan crude oil loadings before, including Plutonio last year. "It was caused because of swordfish. Now the swordfish have passed, so the force majeure has been lifted," said one trader, who buys crude on a regular basis.

Slight delays were also likely for the loading of cargo scheduled in the next two months. Girassol crude produces about 250,000 barrels per day from an offshore oilfield.

Swordfish do not travel in schools. They swim alone or in very loose groups. Swordfish are elongated, round-bodied, and lose all of their teeth and scales by adulthood. They reach a maximum size of 177 in. (455 cm) and 1,400 lb (650 kg), so they are capable of causing damage or putting up quite a fight as many fishermen will tell.

Swordfish feed daily, most often at night when they rise to surface and near-surface waters in search of smaller fish. They particularly like eating squid. They have been observed moving through schools of fish, thrashing their swords to kill or stun their prey and then quickly turn to consume their prey. They are the sole member of the family Xiphiidae.

The swordfish relies on its great speed, capable of swimming up to 50 mph (80 km/h), as well as its agility in the water to catch its prey. One possible defensive use for the sword-like bill is for protection from its few natural predators. Swordfish are vigorous, powerful fighters. When hooked or harpooned, they have been known to dive so quickly that they have impaled their swords into the ocean bottom up to their eyes. They have also run their swords through the planking of small boats when hurt.

Although there are no reports of unprovoked attacks on humans, swordfish do get dangerous when harpooned. This recent attack then, which is uncharacteristic, could also be a manifestation of nature’s dislike for the greedy profiteers guzzling her resources like gluttons.