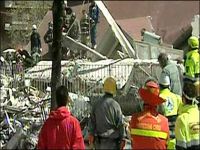 Just 48 hours after the world began to learn about the terrible consequences created by the earthquake registered in Haiti measuring 7.3 on the Richter scale, Barack Obama announced that 3,500 American soldiers would leave for Haiti immediately to provide "solidarity".

The tragedy drew expressions of Haiti's immediate cooperation from dozens of countries. The small airport of Port collapsed, and the United States has direct control of the airport.

According to Roger Searle, professor of geophysics at the University of Durham (UK), Haiti's earthquake was 35 times more powerful than the Hiroshima bomb. The professor also compared the energy released by an earthquake in the Caribbean country with the explosion of half a million tons of TNT.

However, according to Searle's thesis, the energy released in an earthquake in Haiti is a hundredth of the one which exploded during the devastating tsunami in Banda Aceh, in southern Asia. No doubt the tsunami and its destructive power caused a terrible impression on mankind.

Some readers will say, these phenomena are the result of pollution and destruction of the planet, others will say, earthquakes have always existed and are part of how our planet is made up, and others will ask do these phenomena only have natural causes or is some power interested in continuing to occupy strategic zones behind an imperial military plan of unimaginable proportions?

The U.S. Air Force has developed a dangerous project, like something out of a fiction film, but it is not, and that the international community does not know it is running. The HAARP project is a system which can generate violent and unexpected changes in climate.

The Castilian translation of the acronym is HAARP: Research Program for High Frequency Active Aurora. It operates from an attack on the ionosphere with high frequency waves with the power of 1GW, launched from a complex of antennas located in Alaska. The Americans have managed to reproduce an artificial aurora borealis. This system can use energy that is present outside of terrestrial space and bring them together for the purpose of generating abrupt climate changes. That way HAARP can be used as a weapon of war.

Will HAARP be anti-myth or paranoia? No, in its resolution of 28 January 1999 on environment, security and foreign policy (A4-0005/1999), the European Parliament pointed out that the HAARP program is manipulating the environment for military purposes and requested HAARP. The European body, far from suspected as being anti-imperialist requested the establishment of an international convention prohibiting the development of the weather machine.

In accordance with previous scientific investigations and related to the manipulation of frequencies in the ionosphere, it is known that through satellites or other instruments which serve as reconductors it is possible the so-called hyper fields that generate HAARP for uses other than climate change can be used. Among these uses are aspects which are not necessarily harmful to mankind, such as generating the ozone layer.

HAARP also potentially has the capacity to disintegrate objects, generate spontaneous and induced combustions, and even change brain patterns, induce behavior and to cause biological diseases. Research on the HAARP project have emerged from American universities and European centers.

One of the pioneers in research on HAARP is Nick Begich, a research scientist in Anchorage, Alaska, the region where the antennas are located for the project. Begich's research was not only scientific, but also political. He discovered connections between patents and secrecy reserved for the U.S. government, and all related companies that were taking charge of patents. Among the research he has reported, there were some that were about "how to" type Nuclear Explosions without Radiation “radiant energy systems, on horizon radar, detection systems for missiles carrying nuclear warheads, electromagnetic pulses produced by weapons before thermonuclear and other resources of Space War."

Among those who have written about HAARP related projects, is Zbigniew Brzezinski, former security adviser to former President Jimmy Carter, who is related to the political tendency within the American system of power that is Barack Obama. Brzezinski noted the existing alternatives for changes in the thinking of humans and in the ecological war. He said that despite the inconveniences that could be created in certain sectors, the use of technology such as HAARP was inevitable.

"Haiti was a threat to U.S. interests? Obviously not, nor is it a nation that at first sight possesses indispensable natural resources to Washington. What Haiti represents is a key geographical position in the Caribbean in the context of Latin America that is fighting for the recovery processes of major sovereignty since the War of Independence.

Haiti is also one of the world's poorest countries, treated by both U.S. and some European powers as a field of experimentation. Of the Empire little can be doubted.

Translated from the Spanish from the Portuguese version by: