Konstantin Petrovich Feoktistov, Hero of Russia and Hero of the Soviet Union, passed away at age 83 on Saturday, according to a statement by the Russian space agency, Roscosmos. A member of the first three person space crew with Vladimir Komarov and Boris Yegorov. his flight was onboard a vehicle he helped to design. Feoktistov made his first and only space flight on October 12, 1964 aboard the USSR's Voskhod 1 on a one day mission to test the craft's design, perform research and study how a multi-disciplinary team could work together in space. The crew went into space without space suits, there was insufficient room for 3 men in space suits on the craft. 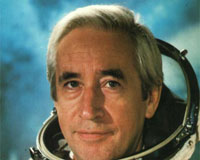 Feoktistov fought with the Soviet Army during the Great Patriotic War, serving in the intelligence forces. His war experience was incredible and rather characteristic of the Soviet Army fighting man. After being captured by a Wehrmacht patrol, he was shot by an SS officer. Fortunately, the bullet only grazed his throat, and Feoktistov was later able to crawl out of the pit he was placed in and make his way to Soviet lines.

Feoktistov helped design Soviet spacecraft and stations such as Mir, Progress and Soyuz. He was critical of the cost of space flight. He worked as a flight controller until finally in 1980, he was assigned to the Soyuz T-3 mission and the 13th expedition crew for the Salyut 6 station. He would come within just a few days of launching when he was grounded due to medical problems.

"The Voskhod venture opened a door to outer space," he told a Russian TV journalist in 2001," and I hoped to walk through that door once again on a serious and longer space mission. Life has, however, rewritten my plans." This was a notable, memorable and sad moment in Soviet space history, that this man who had done so much for the Soviet space program was never able to fulfill his desire to return to space again. It couldn't help but sadden those who had followed his career as part of the cosmonaut program.

After he left the space program, Feoktistov taught at Moscow State Technical University. He also wrote several books on space technology and exploration. The Feoktistov crater on the lunar far side is named in his honor. He was married with four children. It is heroes such as this that made Russia the great country she is today. Perhaps now he will get to have a very special flight in the company of angels, to somewhere that heroes go.