Chipmunks Have the Nuts to Survive an Ice Age

Chipmunks are forest-dwelling, squirrel-like rodents whose size is typically about half that of the average squirrel. In addition to their smaller size, chipmunks may be readily distinguished from squirrels by the linear stripes of white fur which chipmunks sport on their heads and backs. There are twenty-five recognized species of chipmunks, one of which lives in northeast Asia, another in eastern North America, and all of the others in western North America. 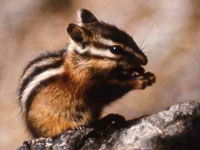 Chipmunks Have the Nuts to Survive an Ice Age

The omnivorous chipmunks eat grain, nuts, fungi, birds' eggs, small frogs, worms, and insects, and during the fall of each year chipmunks stockpile some of those foods in their underground burrows for consumption during the winter. Human vistors at forest parks in North America soon become familiar with the playful antics of the chipmunks, who often forage in campgrounds for scraps of food.

In July of 2004, researchers at the University of Illinois published the results of a field study they conducted of 244 chipmunks in the upper Midwest states of Illinois and Wisconsin. The chipmunks were captured in live traps, and the researchers removed a tiny sample of flesh from the tip of an ear of each chipmunk before releasing the animal close to the site of its capture. Back in the laboratory, the researchers isolated the mitochondrial DNA from each sample of chipmunk flesh and they studied the genetic structure of each sample.

During an Ice Age Glacial Maximum, continental ice sheets up to two miles (or three kilometers) thick cover all of Canada, the Great Lakes, and large portions of the northern USA, including all of New York State, all of the New England states, and half of Alaska. In Eurasia, the continental ice sheets cover all of Scandinavia, the British Isles, Iceland, and large parts of Russia and Siberia.

During an Ice Age Glacial Maximum, the Bering Strait between Alaska and Siberia will become dry land, and in its place will emerge the Bering Land Bridge, 1600 kilometers wide from north to south. The Gulf of Mexico will shrink to half its present size and Mexico’s Yucatan Peninsula will double in size. The eastern seaboard of the USA will extend several hundred miles further out into the Atlantic Ocean, Argentina will nearly double in size, southern Japan will be reconnected with China and Korea, Australia will regain a huge northern territory, and mainland Southeast Asia will merge with the Indonesian Archipelago to form Sundaland.

Nearly all of the United Kingdom will be buried under a huge ice cap, but the sunken, legendary land of Lyonesse, itself almost as large as the entire UK, will emerge from the North Atlantic between Ireland and France to become the new homeland of the British.

The exposed continental shelves on both coasts of India will provide new habitats for wildlife and new opportunities for human settlement. The legendary Adam's Bridge, which the Hindu Epics say was built by the monkey god Hanuman, will emerge once again from the sea to connect India with Sri Lanka. The Maldive Islands in the Indian Ocean will rise as much as 400 feet from a surrounding sea that will be even shallower than it is today.

During a Glacial Maximum many of the northern countries that currently export food will lose most of their agricultural productivity and become more suitable for livestock grazing. But the losses to glaciation and cold in the north will be offset by the gains of exposed continental shelves and new lands for human habitation and agriculture in the south. We may hope that humankind will adjust to these immense and inevitable changes peacefully, but hope, by itself, is not sufficient preparation for a global catastrophe.

All of the plant and animal species living in the world today have survived and evolved through a series of Ice Age cycles going back several million years, so nature has prepared most species to survive an Ice Age. However, at the close of the most recent Glacial Maximum, which ended about 11,000 years ago, most of the megafauna of the Ice Age Steppe, including the mammoth, wooly rhinoceros, and giant cave bears, went extinct, and some researchers blame human hunters, at least in part, for the extinction of the megafauna.

Multiple evidence from geology, sea-sediment cores, ice cores, and the earth’s orbital cycle shows that the earth is already due for the commencement of the next Ice Age Glacial Maximum. During the coming Glacial Maximum, the earth’s human population will be much larger than ever before, so there will be a far greater human influence and pressure on the habitats and survival of all the nonhuman species.

Chipmunks have the nuts to survive an Ice Age.