Iron Meteorite Falls Down on Latvian Town in Broad Daylight

The size of the unidentified celestial body that fell down Sunday evening on the town of Mazsalaca in Latvia was not larger than a fist, Uldis Nulle, a scientist at the Latvian Environment, Geology and Meteorology Center said after visiting the scene of the incident. 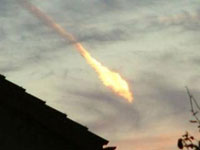 Iron Meteorite Falls Down on Latvian Town in Broad Daylight

The meteorite produced a crater ten meters deep and 20 meters in diameter. Eyewitnesses managed to make videos of the burning celestial body several minutes after it had rammed into the ground, RIA Novosti news agency reports.

“I visited the crash site at night. Now I am going to Mazsalaca too. I assume that the fallen object was not a very large one – the size of a fist. The crater would have been larger otherwise,” he said.

The scientist also believes that the fallen object is of natural origin.

“I don’t believe that it can be a fragment of a satellite or an aircraft,” Nulle said.

Vladimir Svetsov, a senior scientist with the Institute of Dynamics of Geospheres of the Russian Academy of Sciences, believes that the object that crashed into a meadow in northern Latvia, was an iron meteorite.

“Stony meteorites do not reach Earth’s surface, as a rule. They disintegrate and burn when entering the atmosphere. If it was a piece of a satellite that fell down in Latvia, then it must be a very solid satellite, because a light one would be destroyed in the air,” he said.

The scientist added that meteorites about one meter in diameter fall down on Earth about once a year. However, they are mostly stony meteorites which do not leave craters as they do not strike the surface. Iron meteorites make about ten percent of all meteorites.

A similar event took place about ten years ago in Bashkiria. An iron meteorite crashed into a collective farm field on the outskirts of the town of Sterlitamak and left a ten-meter crater.

“The meteorite went about five meters deep into the ground because the land there was very soft,” Mr. Svetsov said.

The Latvian meteorite fell down near an apartment building, but no one was injured in the incident.

Valentina Yesipova, a scientist at the Astronomical Institute, said that the Latvian meteorite most likely weighed 30-40 kilograms.

“If it had struck a house, the building would have been turned into dust. Most likely, it is an iron meteorite that went several meters into the ground. There was only one meteorite like that before – the Sikhote Alin Meteorite, which was much larger. One piece of that meteorite weighed 1,745 kilos,” the scientist said in an interview with the Komsomolskaya Pravda newspaper.

The meteorite hit the ground near the Latvian town of Mazsalaca on October 25, at about 18:30. Ansis Steinbergs, an eye-witness, said that he was using his camcorder, when he suddenly heard something roaring in the air, Delfi website wrote.

“The sound that I heard was like the sound of a roaring aircraft engine. It sounded like as if a plane was flying low above the ground. Then I saw a ball of fire approaching the ground very fast, and it fell down near the town,” the man said.