Israeli doctors found out, that the Jordan River is contaminated with twenty variations of intestinal infections. 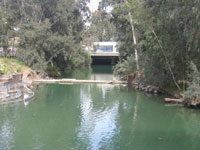 According to the Christian tradition, the Jordan River was the place where Jesus was baptized. By now the Jordan has turned into a dangerous river. It has been dreadfully polluted.

An endless stream of tourists and pilgrims aspire either to take a look or even plunge into the river known by the Biblical texts. However, for the time being the river does not look attractive at all. Moreover, bathing in the river has become dangerous.

As early as the previous year ecologists became anxious, as the river was on the verge of running dry, since its waters were used for watering Israeli, Palestinian and Jordanian fields. The residues of fertilizers flow back into the river, and, what is more, the builders working in that area have fallen into the habit of throwing refuse in the Jordan.

Ecologists claim that the amount of the harmful bacteria has dreadfully expanded. The number of intestinal bacteria was rated at more than 20 variations.

The Jordan is considered to be one of the world's most sacred rivers. It is 251 kilometers (156 miles) long. In 1964, Israel began operating a dam that diverts water from the Sea of Galilee, a major Jordan River water provider, to the National Water Carrier. Also in 1964, Jordan constructed a channel that diverted water from the Yarmouk River, another main tributary of the Jordan River. Syria has also built reservoirs that catch the Yarmouk's waters. Environmentalists blame Israel, Jordan and Syria for extensive damage to the Jordan River ecosystem.

In modern times, the waters are 70% to 90% used for human purposes and the flow is much reduced. Because of this and the high evaporation rate of the Dead Sea, the sea is shrinking. All the shallow waters of the southern end of the sea have been drained in modern times and are now salt flats.

In September 2006, a problem arose with contamination: just downstream, raw sewage began flowing into the water. Small sections of the Jordan's upper portion, near the Sea of Galilee, have been kept pristine for baptisms. Most polluted is the 60-mile downstream stretch - a meandering stream from the Sea of Galilee to the Dead Sea. Environmentalists say the practice has almost destroyed the river's ecosystem. Rescuing the river could take decades, according to environmentalists. In 2007, Friends of the Earth Middle East named the Jordan River as one of the world's 100 most endangered ecological sites, due in part to lack of cooperation between Israel and the neighboring Arab states.