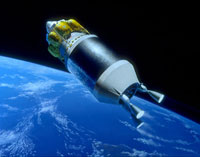 It was Russia that made a breakthrough in the field of space nuclear power at the beginning of the 1980s when Russian scientists created a small-sized space installation known as Topaz.

“It was much more effective than foreign analogues in terms of technical and operational characteristics. We used enriched uranium as fuel,” says Mikhail Kovalchuk, the director of the Kurchatov Institute.

“We are not simply competitive in the field of power installations. We are actually pioneers. Very few organizations have such technologies. Americans were really surprised to see our Topaz installations. They haven’t seen anything like that before.”

The main goal of such power installations is to provide satellites with energy. In general, nuclear power installations are used only in situations when it is impossible to use any other kinds of energy sources. On the near-earth orbit solar energy elements are widely used as the basic energy source. Today their capacity makes approximately 20 kilowatt.

However, such capacity is not enough for distant space flights, that is why there is only one alternative to use these nuclear power installations.

“Nuclear power space installation should not only provide the crew with the energy necessary for life conditions, but it should also be powerful enough to keep nuclear rocket engine working. According to some estimations the capacity of such installation should make about 100 kilowatt,” says Michael Kovalchuk.

“The main idea is to create a nuclear-powered tug spacecraft which could transport cargoes or people to space. Such a tug will help us make our Lunar and Martian space programs real and competitive. That is why the creation of this nuclear space tug is extremely important. If we are able to create a new generation of nuclear power installations, mankind will soon be able to explore space in industrial scale.”