Caesarean section performed on pregnant monkey to save its baby

Doctors helped a tiny monkey, which weighed about two pounds, give birth to its unusually large baby. They had to perform the Caesarean section on the little ape because the baby weighed almost the same as the mother. 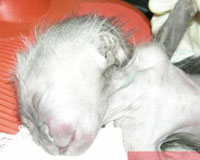 Caesarean section performed on pregnant monkey to save its baby

Cebus capucinus is one of the smallest monkeys in the world. Monkey Arina from the Novosibirsk Zoo belongs to this species. Its pelvis became narrow after a serious illness.

Employees of the Novosibirsk Zoo were glad to hear the news about Arina’s pregnancy. However, when her belly began to grow they started worrying about her. Finally the monkey’s body looked like a watermelon.

“We were shocked after we examined the monkey. The baby was about the size of the mother. Such a big baby could not be delivered naturally, - says Evgeny Kozlov,a vet at the zoo. – So we had to put Arina on the operation table, because she could develop a blood poisoning. It took us about an hour and a half to operate the monkey.

Fortunately, the operation went well and now Arina feels perfect, and so does her baby.