A total solar eclipse is expected to take place on July 22, at about 8:00 a.m. Beijing time. The Moon will cast its shadow on planet Earth for 6 minutes and 39 seconds. It will be the longest eclipse during the latest two millenniums, China’s official Xinhua news agency said. 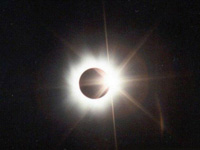 It will be possible to eyewitness the spectacular phenomenon in India, Nepal,  Bhutan, China and Japan. The eclipse will be partially seen in the north-west of Oceania, in Russia’s Far East and in Kazakhstan.

The amazing natural phenomenon will appear in all its beauty for China , scientists of the Chinese Academy of Sciences said.

The last total eclipse of the Sun occurred on August 1, 2008. The next is expected on July 11, 2010. The most remarkable eclipse took place on August 11, 1999, when it coincided with the planet parade and could be observed all across Europe.

Total solar eclipses are rare events. Although they occur somewhere on Earth every 18 months on average, it has been estimated that they recur at any given place only once every 370 years, on average. The total eclipse only lasts for a few minutes at that location, as the Moon's umbra moves eastward at over 1700 km/h. Totality can never last more than 7 min 31 s, and is usually much shorter: during each millennium there are typically fewer than 10 total solar eclipses exceeding 7 minutes.