Missing links that never were (part I) 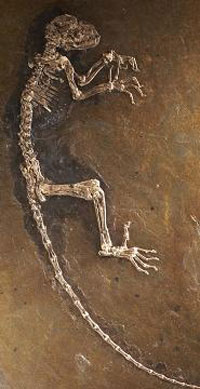 Missing links that never were (part I)

Does the recent discovery of a supposed 47 million year old fossil of a monkey furnish us with a finally discovered "missing" link? The monkey is fully-formed and complete, but it shares similarities belonging to various species. That doesn't qualify it to be a true transitional form or missing link.

In many other cases, however, evolutionists will use shared similarities of traits between various species as an example of a transitional (or "missing") link, but these are not true "missing" or transitional links so long as the traits are complete and fully-formed.

Millions of people are taught in schools and textbooks all over the world that the fossil record furnishes scientific proof of evolution. But, where are there fossils of half-evolved dinosaurs or other creatures?

The fossil record contains fossils of only complete and fully-formed species. There are no fossils of partially-evolved species to indicate that a gradual process of evolution ever occurred. Even among evolutionists there are diametrically different interpretations and reconstructions of the fossils used to support human evolution from a supposed ape-like ancestry.

In fact, all of the fossils, with their fancy scientific names, that have been used to support human evolution have eventually been found to be either hoaxes, non-human, or human, but not both human and non-human. Yet, many modern school textbooks continue to use these long disproved fossils as evidence for human evolution. Evolutionists once reconstructed an image of a half-ape and half-man (known as The Nebraska Man) creature from a single tooth! Later they discovered that the tooth belonged to an extinct species of pig! The "Nebraska Man" was used as a major piece of evidence in the famous Scopes Trial in support of Darwin's evolutionary theory.

At times evolutionists have used various bones gathered from many yards of each other and classify them as belonging to the same creature (even when there's no proof). They then reconstruct from these bones whatever will support their hypotheses. The fossil case "Lucy" is an excellent example of this. Scientists have only forty percent of the bones for Lucy. The bones were found yards from each other, some were found even a mile or more away! The knee joint (the main evidence used) was found two hundred feet below ground from the rest of the bones.

Many of the leading scientists doubt that the bones all belong to the same species or individual. And, some of the key bones are crushed. Yet, from all of this evolutionists have reconstructed a drawing of an ape-man creature (in full color) for display in textbooks and museums! Many experts are not convinced that Lucy was an ape-man because they're not convinced all of the bones belong to the same individual or even the same species. Many leading authorities have said that "Lucy" is really an extinct ape, but not an ape-man. Those scientists who are convinced that Lucy was an ape-man are the ones that receive all the attention from the mainstream media.

Scientist Dr. Walt Brown, in his fantastic book "In The Beginning", makes this point by saying "All species appear fully developed, not partially developed. They show design. There are no examples of half-developed feathers, eyes,skin, tubes (arteries, veins, intestines, etc.), or any of thousands of other vital organs. Tubes that are not 100% complete are a liability; so are partially developed organs and some body parts. For example, if a leg of a reptile were to evolve into a wing of a bird, it would become a bad leg long before it became a good wing."

A lizard with half-evolved legs and wings can't run or fly away from its predators. How would it survive? Why would it be preserved by natural selection? Imagine such a species surviving in such a miserable state over many millions of years waiting for fully-formed wings to evolve!

Some evolutionists cite the fossil of an ancient bird known to have claws as an example of a transitional link. However, there are two species of birds living today in South America that have claws on their wings, but even evolutionists today do not claim that these birds are transitional links from a reptilian ancestry. These claws are complete, as everything else on the birds.

What about all those spectacular and popular claims reported in the mass media of evolutionists having discovered certain transitional forms in the fossil record? Such claims have not been accepted by all evolutionists and, after much investigation and analysis, these claims have been found to have no hard basis in science. This has been the case of every so-called "missing link" and "transitional" form discovered since Darwin.

Recently it was thought they had discovered fossils of dinosaurs with feathers until they found out that the so-called feathers were really scales which only had the appearance of feathers. Scientists theorize the scales took upon a feather-like appearance during some brief stage of decomposition before being fossilized. Even if they were feathers, this still wouldn't be any kind of evidence to support macro-evolution unless they can show a series of fossils having part-scale/part-feather structures as evidence that the scales had really evolved into feathers.

The recent news about a footprint found to be 1.5 millions years as evidence for human evolution is based on circular reasoning. First, many don't realize the evolutionary assumptions involved in dating fossil layers, but that is another story. Readers who wish to pursue the subject may find the Pravda article "Are Fossils Really Millions Years Old?" of interest. Many have wrongly believed that evolutionists use infallible scientific dating methods. Concerning the recent discovery of a 1.5 million year footprint, it is assumed that because humans did not exist 1.5 million years ago that this footprint, which evidence shows belongs to a creature who walked erect, must have belonged to a simian being that was in the process of evolving into a human. This conclusion, actually, is based on a whole series of assumptions.

Evolutionists claim that genetic and biological similarities between species is evidence of common ancestry. However, that is only one interpretation. Another interpretation is that comparative similarities are due to a common Designer who designed similar functions for similar purposes in all of the various species and forms of life. Neither position can be scientifically proved.

It is not rational to believe that genetic information can come about by chance (i.e. random mutations) so it is much more logical to believe that genetic and biological similarities between species are because of a common designer rather than common ancestry. The Creator designed similar genes and biological functions for similar purposes in all of the various forms of life. God was the first Genetic Engineer!

Not only are there no true transitional links in the fossil record, but the fossils themselves are not in the supposed geological sequential order as evolutionists claim in their textbooks. Of course, evolutionists have their various circular and unsupported arguments or reasons for why this is so.

If evolution across biological kinds (known as macro-evolution) really occurred then we should find billions of clear and indisputable transitional forms ("missing" links) in the fossil record (i.e. fossils of fish with part fins, part feet). Instead we find only a few very disputable "transitional" forms that even all evolutionists cannot agree upon.

The author, Babu G. Ranganathan, is an experienced Christian writer. Mr. Ranganathan has his B.A. from Bob Jones University with concentrations in theology and biology and, additionally, has completed two full years of graduate study at Western New England College School of Law in Springfield, Massachusetts. As a religion and science writer he has been recognized in the 24th edition of Marquis Who's Who In The East. Be sure to read the author's articles: The Natural Limits of Evolution and The Bible Vs. The Traditional View of Hell. Email author at: [email protected]