The Abel Prize is an international prize presented annually by the King of Norway to one or more outstanding mathematicians. The prize is named after Norwegian mathematician Niels Henrik Abel. It has been often described as the "mathematician's Nobel" prize and is among the most prestigious awards in mathematics. It comes with a monetary award, which in 2009 was 684,000 euro (929,000 US dollar). 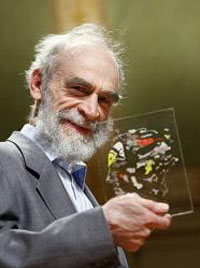 This year the Norwegian Academy of Science and Letters awarded the Abel Prize to Russian-French mathematician Mikhail Gromov for "his revolutionary contributions to geometry".

Gromov was born in Leningrad (currently Saint Petersburg) in 1943. He graduated from the Leningrad State University and got a degree in mathematics. In 1974 he migrated to the USA and started working there as a Professor of Mathematics at New York University.

In 1981, he joined the staff at the Paris VI University and a year later he moved over to IHES.

Other scientists are very impressed by Mikhail Gromov’s abilities and compare him with Einstein, Newton and Leonardo da Vinci.

"Mikhail Gromov is always in pursuit of new questions and is constantly thinking of new ideas for solutions to old problems. He has produced deep and original work throughout his career and remains remarkably creative," the committee said.

Norway's King Harald V presented Gromov with 935,000 dollars at a ceremony in Oslo, after the Norwegian Academy of Science and Letters awarded him the Abel Prize on March 26.

At the moment Mikhail Gromov is applying his knowledge in geometry to biology. He is trying to develop the geometric model of human heart. Experts believe that such a model can appear to be the breakthrough in the field of cardiology.

Mikhail Gromov says that his unnatural and crazy tasks which can be rarely met in our everyday life. He also believes that mathematics does not solve this tasks – it helps understand their structure.