Russian scientists operate computer with the power of mind

Russian scientists now can use the power of mind to give commands to a computer. A system of electrodes shaped in a helmet and a special program reads the impulses of the brain and transforms them into symbols on the computer screen. 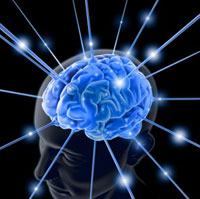 Russian scientists operate computer with the power of mind

A person wearing the helmet will be able to type texts and control mechanical devices by means of mere thinking. The equipment can be helpful to people of limited physical abilities.

“A paralyzed person will be able to transmit the information to the outer world. He will choose one of the symbols and the program will display a glass of water, if a person is thirty,” Dmitry Karlovsky, the lead scientist in the neuro-computer interface project said.

The scientists also designed an experimental model of a miniature vehicle that can be guided with the power of mind. A driver will only have to think of necessary commands, and the car will follow them.

Pravda.Ru previously reported about BrainGate device which helps move objects with the power of mind.

There are a lot of paralyzed and disabled people around the world today. These people cannot imagine their life without others and many of them feel uncomfortable about it. For many years scientists have been doing their best to help such people and to ease their lives and only today they seem to have found the solution.

A brain implant makes it possible for paralyzed patients to move a robotic arm and a computer cursor with some ease.

The report published in the journal Nature comes amid intense efforts by neuroprosthetics researchers to give paralyzed patients more normal lives.

A second journal study involving two monkeys suggests such implants may allow paralyzed people to type the equivalent of 15 words a minute.

Brain implants "are really a launching pad for a whole new kind of neurotechnology," says John Donoghue of Brown University in Providence, co-author of the first study. He and colleagues report that an implant enabled a 25-year-old paralyzed man to squeeze a robotic hand and use a robotic arm to move objects and a computer cursor.