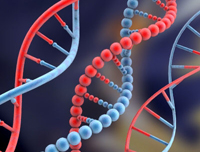 Life and genetic information are far too complex to have happened by chance. Therefore, it is much more logical to believe that the genetic and biological similarities between species are due to a common Designer rather than common ancestry through evolution. The Creator simply designed similar functions for similar purposes in all of the various forms of life from the simplest to the most complex.

It is important to understand that only those mutations produced in the genes of reproductive cells, such as sperm in the male and ovum (or egg cell) in the female, are passed on to offspring. Mutations and any changes produced in other body cells are not transmitted. For example, if a woman were to lose a finger it would not result in her baby being born with a missing finger. Similarly, even if an ape ever learned to walk upright, it could not pass this characteristic on to its descendants. Thus, modern biology has disproved the once-held theory that acquired characteristics from the environment can be transmitted into the genetic code of offspring.

Even if scientists ever do produce life from non-living matter it won't be by chance so it still wouldn't help support any theory for the chance or evolutionary origin of life.

In the particular case involving artificial, or synthetic, life scientists don't actually create or produce life itself from non-living matter. What scientists do in this case is create (by intelligent design) artificial DNA (genetic instructions and code) which is then implanted into an already existing living cell and, thereby, changing that cell into a new form of life. And, again, even if scientists ever do create a whole living cell from scratch (and not just its DNA) it still would not be by chance but by intelligent design.

Artificial, or synthetic, life is another form of genetic engineering. But God was there first. Remember that! What if we should find evidence of life on Mars? Wouldn't that prove evolution? No. It wouldn't be proof that such life had evolved from non-living matter by chance natural processes. And even if we did find evidence of life on Mars it would have most likely have come from our very own planet - Earth! In the Earth's past there was powerful volcanic activity which could have easily spewed dirt-containing microbes into outer space which eventually could have reached Mars. A Newsweek article of September 21, 1998, p.12 mentions exactly this possibility.

"We think there's about 7 million tons of earth soil sitting on Mars", says (evolutionist) Kenneth Nealson. "You have to consider the possibility that if we find life on Mars, it could have come from the Earth" [Weingarten, T., Newsweek, September 21, 1998, p.12]. Furthermore, MIT scientist Dr. Walt Brown (a creationist) in his book In The Beginning points out that during the great Genesis flood, as recorded in the Bible, the fountains of the deep that were let loose could have easily spewed out meteors andmeteorites into space that very well may have contained micro-organisms such as bacteria.

Of course, once there is a complete and living cell then the biological mechanisms exist to direct the formation of more cells. The question is how did life come about when there was no directing mechanism in Nature. An excellent article to read by scientist and biochemist Dr. Duane T. Gish is "A Few Reasons An Evolutionary Origin of Life Is Impossible".

The great British scientist Sir Frederick Hoyle has said that the probability of the sequence of molecules in the simplest cell coming into existence by chance is comparable to the probability of a tornado going through a junk yard of airplane parts and assembling a 747 Jumbo Jet!

Young people, and even adults, often wonder how all the varieties and races of people could come from the same human ancestors. Well, in principle, that's no different than asking how children with different color hair ( i.e. blond, brunette, brown, red ) can come from the same parents who both have black hair.

What about the fossils?

The fossil record contains fossils of only complete and fully-formed species. There are no fossils of partially-evolved species to indicate that a gradual process of evolution ever occurred. Even among evolutionists there are diametrically different interpretations and reconstructions of the fossils used to support human evolution from a supposed ape-like ancestry. In fact, all of the fossils, with their fancy scientific names, that have been used to support human evolution have eventually been found to be either hoaxes, non-human, or human, but not both human and non-human. Yet, many modern school textbooks continue to use these long disproved fossils as evidence for human evolution. Evolutionists once reconstructed an image of a half-ape and half-man (known as The Nebraska Man) creature from a single tooth! Later they discovered that the tooth belonged to an extinct species of pig! The "Nebraska Man" was used as a major piece of evidence in the famous Scopes Trial in support of Darwin's evolutionary theory.

Some of the Internet sites mentioned at the end of this article contain much more in-depth information and explanation about the fossil record.

What we believe about our origins influences and affects our attitude and philosophy toward life and how we view ourselves (our worth) and how we view others (their worth). This is no small issue!

Yes, natural laws are adequate to explain how the order in life, the universe, and even a microwave oven operates but mere undirected natural laws can never fully explain the origin of such order.

Belief in neither evolution or creation is necessary to the actual study of science itself. One can study and understand how the human body works and become a first class surgeon regardless of whether he or she believes the human body is the result of the chance forces of Nature or of a Supreme Designer.

Science cannot prove that we are here by chance (evolution) or by design (creation). However, the scientific evidence can be used to support one or the other. If some astronauts from Earth discovered figures of persons similar to Mt. Rushmore on an uninhabited planet there would be no way to scientifically prove the carved figures originated by design or by chance processes of erosion. Neither position is science, but scientific arguments may be made to support one or the other.

It is only fair that evidence supporting intelligent design be presented to students alongside of evolutionary theory, especially in public schools, which receive funding from taxpayers, who are on both sides of the issue. Also, no one is being forced to believe in God or adopt a particular religion so there is no true violation of separation of church and state. As a religion and science writer, I encourage all to read my Internet article "The Natural Limits of Evolution" for a more in-depth study of the issue of origins and intelligent design.

An excellent source of information from highly qualified scientists who are creationists is the Institute for Creation Research in San Diego, California. Also, the reader may find answers to many difficult questions concerning the Bible (including questions on creation and evolution, Noah's Ark, how dinosaurs fit into the Bible, etc.) at http://www.ChristianAnswers.net.