The World Wide Web celebrated its 20th anniversary on March 13. Twenty years ago, Briton Tim Berners-Lee submitted a memorandum with his suggestions on the structure of the computer network to the administration of the European Organization for Nuclear Research. Something that we now know as the ‘browser’ appeared in about a year. 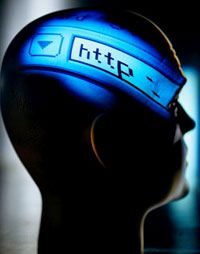 Experts believe that internet search engines will eventually become the first representatives of the artificial intelligence.

The founding father of the Internet, Tim Berners-Lee, is now working on new project – the third generation network. On 25 December 1990 he implemented the first successful communication between an HTTP client and server via the Internet with the help of Robert Cailliau and a young student staff at CERN.

Berners-Lee had built all the tools necessary for a working Web by Christmas 1990,: the HyperText Transfer Protocol (HTTP), the HyperText Markup Language (HTML), the first Web browser (named WorldWideWeb, which was also a Web editor), the first HTTP server software (later known as CERN http), the first web server (http://info.cern.ch), and the first Web pages that described the project itself. The browser could access Usenet newsgroups and FTP files as well. However, it could run only on the NeXT; Nicola Pellow therefore created a simple text browser that could run on almost any computer. To encourage use within CERN, they put the CERN telephone directory on the web - previously users had had to log onto the mainframe in order to look up phone numbers.

By 1996 it became obvious to most publicly traded companies that a public Web presence was no longer optional. Though at first people saw mainly the possibilities of free publishing and instant worldwide information, increasing familiarity with two-way communication over the "Web" led to the possibility of direct Web-based commerce (e-commerce) and instantaneous group communications worldwide. More dotcoms, displaying products on hypertext webpages, were added into the Web.