It is generally believed that many developing countries, such as Russia and China, need to complete their reforms and improve national living standards and ecology before they could deal with space exploration. Indeed, there are too many urgent problems that governments have to solve on the planet, whereas space does not seem to be important at all. 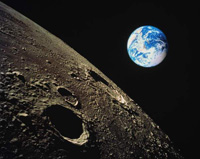 “If you have only one dollar, and want to give it to either cancer research or space exploration, pick cancer research. But it’s not an "either or" choice. If our society really wanted to, we could provide a decent standard of housing, education, and medical care for everyone, and still have plenty left over for space exploration,” US writer Tony Reichhardt, the author of “Space Shuttle: The First 20 Years.”

Do common people really wish to explore space taking into consideration the current economic situation on the globe?

The state of economic affairs in the USSR was extremely difficult in the beginning of the 1960s. Many workers were going on strikes in 1962, the next year after Yuri Gagarin’s epoch-making first-ever manned space flight. However, the ambitious space program of the Soviet Union began to develop speedily in the beginning of the 1960s. The program resulted in the creation of such vital industrial branches as electronics, automatics and instrument engineering.

Furthermore, the USSR’s breakthrough in space exploration earned a whole new reputation for the country. The Soviet Union became a technically advanced nation, and Russia subsequently inherited the status after the break-up of the Union.

There are hardly any people in Russia nowadays who regret the development of the Soviet space exploration program. The nation was spending not more than one percent of its GDP on the program. The spending index had reduced to 0.11 percent by 2008.

The situation in the United States was similar to than in the USSR during the 1960s. The war in Indo-China and the urgent need of social reforms seemed to be much more important in comparison with the Apollo program. However, the USA fulfilled its mission to the Moon with the support of John Kennedy and the nation’s political elite.

Each dollar, which the USA spent on space exploration, brought seven dollars of profit, a report made by the US Midwest Institute during the 1970s said. When the USA and the USSR were competing in their space exploration programs, the two countries wanted to show which conditions they could provide for the development of science and technology. To put it in a nutshell, the space programs of the two superpowers were the litmus test of their vitality.

The current situation is the same. A recent report from the Washington-based Center for Strategic and International Studies clearly said that NASA’s civil space program was demonstrating America’s international leadership and boosting its innovative development.

A space program is supposed to trigger the scientific development and strengthen the international image of a nation. It is possible to achieve these goals with the help of innovative programs only. Each separate country has its own start at this point. Iran and North Korea pursue the launch of their first national satellites. Russia’s space program will preserve its function only if the nation proceeds with another groundbreaking achievement.