Jerry Jalava, a young man from Finland, has all chances to become the world’s first cyborg. A part of his body has been equipped with the Linux Operating System. The man designed several programs for his finger, which works as a USB drive, infox.ru website wrote. 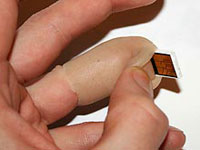 The man says that he is thrilled to have a 2GB memory stick instead of a finger. He wrote on his blog that it was a very useful device which could never be lost. “It is not attached permanently to my body so when I’m using the USB I just leave my finger inside the slot and pick it up when I’ve finished,” he said.

The readers of Germany’s Die Welt believe that the Finnish man has a right to claim the title of the first cyborg in the world.

The man lost his finger in an accident on the outskirts of Helsinki, the capital of Finland. He was riding his motorbike when a deer suddenly appeared on the road. He was hospitalized with minor injuries after the crash, where he had to have the ring finger on his left hand amputated.

After the operation Jalava decided to visit the hospital again to have the prosthetic finger. The medics suggested the young programmer should equip the removable plastic finger with a 2GB memory stick. The patient was thrilled with such an opportunity.

It is not ruled out that many people will be using such bionic devices in their everyday life in the future.

Bionics is the application of biological methods and systems found in nature to the study and design of engineering systems and modern technology. The word "bionic" was coined by Jack E. Steele in 1958, possibly originating from the Greek word "βίον", pronounced "bion", meaning "unit of life" and the suffix -ic, meaning "like" or "in the manner of", hence "like life". Some dictionaries, however, explain the word as being formed from "biology" + "electronics".

The transfer of technology between life forms and synthetic constructs is, according to proponents of bionic technology, desirable because evolutionary pressure typically forces living organisms, including fauna and flora, to become highly optimized and efficient. A classical example is the development of dirt- and water-repellent paint (coating) from the observation that the surface of the lotus flower plant is practically unsticky for anything (the lotus effect).