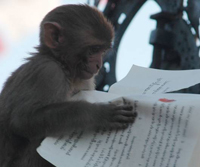 The evidence from genetics supports only the possibility for microevolution (or horizontal) evolution within biological "kinds" such as the varieties of dogs, cats, horses, cows, etc., but not macroevolution (or vertical) evolution which would involve variations across biological "kinds"), especially from simpler kinds to more complex ones (i.e. from fish to human). The genes already exist in every species for micro-evolution, but not all genes have the same opportunity for expression. Macro-evolution, on the other hand, would require the creation of entirely new genes and not just new combinations or alterations of already existing genes in a population.

Even if a new species develops but there are no new genes or new traits, but only new variations of already existing genes and traits, then there still is no macro-evolution (variation across biological kinds) and the different species would remain within the same biological "kind" even though they would no longer have the ability to inter-breed. Unless Nature has the intelligence and ability to perform genetic engineering (to construct entirely new genes and not just to produce variations and new combinations of already existing genes) then macroevolution will never be possible in Nature.

Abortion clinics have been known to console their patients by telling them that what they're terminating isn't really a human being yet but is only a guppie or tadpole!

Variations across biological kinds such as humans evolving from ape-like creatures and apes, in turn, evolving from dog-like creatures and so on, as Darwinian evolutionary theory teaches, are not genetically possible. Although the chemicals to make entirely new genes exist in all varieties of plant and animal kinds, the DNA or genetic program that exists in each plant or animal kind will only direct those chemicals into making more of the same genes or variations of the same genes but not entirely new genes.

There is no scientific evidence that random mutations in the genetic code caused by random environmental forces such as radiation will increase genetic information and complexity which is what ultimately would be necessary to turn amoebas into humans. In fact, the law of entropy in nature would prevent random mutations from being able to accomplish such a feat!

Biological variations are determined by the DNA or genetic code of species. The DNA molecule is actually a molecular string of various nucleic acids which are arranged in a sequence just like the letters in a sentence. It is this sequence in DNA that tells cells in the body how to construct various tissues and organs.

The common belief among evolutionists is that random mutations in the genetic code produced by random environmental forces such as radiation, over time, will produce entirely new genetic sequences or genes for entirely new traits which natural selection can act upon resulting in entirely new biological kinds or forms of life . Evolutionists consider mutations to be a form of natural genetic engineering.

However, the very nature ofmutations precludes such a possibility. Mutations are accidental changes in the sequential structure of the genetic code caused by various random environmental forces such as radiation and toxic chemicals.

Almost all true mutations are harmful, which is what one would normally expect from accidents. Even if a good mutation occurred for every good one there will be thousands of harmful ones with the net result over time being disastrous for the species.

Most biological variations, however, occur as a result of new combinations of previously existing genes - not because of mutations, which are rare in nature.

Sometimes mutations may trigger the duplication of already existing traits (i.e. an extra finger, toe, or even an entire head, even in another area of the body!). But mutations have no ability to produce entirely new traits or characteristics.

Furthermore, only those mutations produced in the genes of reproductive cells, such as sperm in the male and ovum (or egg cell) in the female, are passed on to offspring. Mutations and any changes produced in other body cells are not transmitted. For example, if a woman were to lose a finger it would not result in her baby being born with a missing finger. Similarly, even if an ape ever learned to walk upright, it could not pass this characteristic on to its descendants. Thus, modern biology has disproved the once-held theory that acquired characteristics from the environment can be transmitted into the genetic code of offspring.

Young people, and even adults, often wonder how all the varieties and races of people could come from the same human ancestors. Well, in principle, that's no different than asking how children with different color hair (i.e., blond, brunette, brown, red) can come from the same parents who both have black hair.

Of course, once there is a complete and living cell then the genetic program and biological mechanisms exist to direct and organize molecules to form into more cells. The question is how did life come into being when there was no directing mechanism in Nature. An excellent article to read by scientist and biochemist Dr. Duane T. Gish is " A Few Reasons An Evolutionary Origin of Life Is Impossible ".

There is, of course, much more to be said on this subject. Scientist, creationist, debater, writer, and lecturer, Dr. Walt Brown covers various scientific issues ( i.e. fossils, "transitional" links, biological variation and diversity, the origin of life, comparative anatomy and embryology, the issue of vestigial organs, the age of the earth, etc. ) at greater depth on his website at www.creationscience.com .

On his website, Dr. Brown even discusses the possibility of any remains of life on Mars as having originated from the Earth due to great geological disturbances in the Earth's past which easily could have spewed thousands of tons of rock and dirt containing microbes into space. In fact, A Newsweek article of September 21, 1998, p.12 mentions exactly this possibility.

An excellent source of information from highly qualified scientists who are creationists is the Institute for Creation Research in San Diego, California. Also, the reader may find answers to many difficult questions concerning the Bible (including questions on creation and evolution, Noah's Ark, how dinosaurs fit into the Bible, etc.)at www.ChristianAnswers.net .

It is only fair that evidence supporting intelligent design or creation be presented to students alongside of evolutionary theory, especially in public schools which receive funding from taxpayers who are on both sides of the issue. Also, no one is being forced to believe in God or adopt a particular religion so there is no true violation of separation of church and state. As a religion and science writer, I encourage all to read my Internet article "The Natural Limits of Evolution" at my website www.religionscience.com for more in-depth study of the issue.

The author, Babu G. Ranganathan, is an experienced Christian writer. Mr. Ranganathan has his B.A. degree with concentrations in theology and biology. As a religion and science writer he has been recognized in the 24th edition of Marquis Who's Who In The East.