The debris of the two satellites, which collided on Earth’s orbit for the first time in the history of mankind in February of this year, begin to fall down on the planet, RIA Novosti reports with reference to the US Strategic Command, which monitors the near-Earth space. 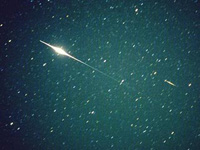 The fragments of the two satellites, which fall down on Earth, pose no danger at all, for they are tiny pieces of the craft – not larger than 1 centimeter. The fragment numbered as 1993-036PX will enter the Earth’s atmosphere on March 12. Fragment 1993-036KW will enter the atmosphere on March 28, and fragment 1993-036MC will follow on March 30, Spaceweather.com website says. All of them are only one centimeter in size. They will be destroyed in the atmosphere and will pose no danger to people.

Russia ’s Cosmos 2251 military communication satellite was not operating for many years. It was living out its days in orbit like many other old satellites.

Cosmos 2251 satellite weighs about 800 kilos. It was used as a communication satellite for military purposes. The satellite lasts for only three years.

Iridium 33/24946 is a commercial communication craft weighing about 700 kilos. It lasts from five to eight years. There were 66 Iridium satellites in near-Earth orbit before the collision. Iridium Holdings LLC will replace the damaged satellite during the upcoming 30 days.

Three hundred and fifty five catalogue entries have been made to designate the debris of Cosmos 2251 and 159 entries – for the fragments of Iridium 33. The debris of Cosmos float in space at the heights from 198 to 1,689 kilometers. The numbers for Iridium are smaller – from 582 and 1,262 kilometers.